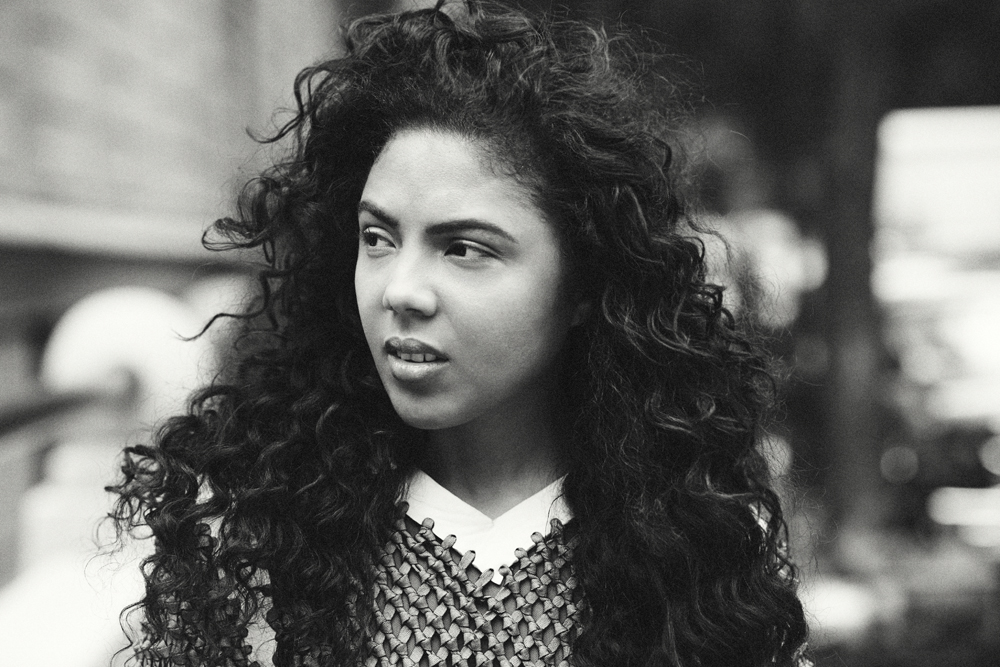 The Swedish winter can be brutal; it’s dark, cold, and wet. Or, as the singer Mapei sees it, the perfect background for writing and producing upbeat pop music.

Born in Rhode Island, but raised in Stockholm, Mapei got her start as a rapper. The 2009 DJ Mehdi-produced Cocoa Butter Diaries EP offered a glimpse into what she was capable of, but it wasn’t until 2013, when she released her unmissable hit “Don’t Wait” that everything changed. “I felt it. I was like, This is a banger,” she says. Written off a tweet by her cousin—“a friend indeed”—the track was originally meant to be a Ying Yang Twins-style snap song. The soulful single now opens Mapei’s début album, Hey, Hey, out today.

“I was just in the studio having fun, so that’s what came out,” says Mapei. Hey, Hey, which means “hi” in Swedish, is considerably more pop than her earlier work. Produced by Magnus Lidehäll, the album is a hybrid of styles new and old, culminating in an overview of modern-day pop. “I was just having fun improvising on Lidehäll’s stuff, and it turned into, let’s make some more songs.”

If anything, “Don’t Wait” is only a small segment of what Hey, Hey offers in terms of musical breadth. “All music has become popular music because our generation is influenced by so many different genres, so that, if you’re creative, if you’re an artist, you can do anything you want to do,” says Mapei, in reference to finding her musical balance. “There are no boundaries.”

The single’s release and its subsequent much-hyped remixes—including one by Chance the Rapper, who lent a verse and remixed the single with Social Experiment, and one from the late Godfather of House, Frankie Knuckles—were followed up by “Change,” which took on a life of its own when a Bob Dylan-influenced fan-made video went viral. “It really enhanced the song,” says Mapei of the video, which features New Yorkers from all walks of life holding up cardboard signs of the affirming lyrics throughout all five boroughs.

The trumpet-induced funk of “Come On Baby” has a tripped-out, big-band feel and eventually breaks into Mapei’s rap, the first time her older musical style comes through. She says the choice to transition from rap music to pop came naturally. In talking about her development, she says, “They’re all me, this is what came at this time.”

Mapei’s personal favorite song off the album is the guitar-backed “Believe.” “It’s personal. It’s me talking to myself, trying to give myself positive energy,” she explains. “I’ve been here before, baby,” she sings on the track, over riffs by Lidehäll.

“Second to None” provides a taste of what might come if Mapei decides to take yet another turn in a new direction, as she confidently states “The day that I win I’ll be second to none.” Entertaining the possibilities, she says, “Maybe I’ll do a spoken-word album or something like that. You never know,” displaying a go-with-the-flow attitude comes through in the synth-filled “Keep It Cool,” whose chill beats radiate Scandinavian influence yet still maintain the singer’s upbeat disposition.

The album closes on Mapei’s modern doo-wop take on the Shirelles’ “Baby It’s You.” Adding her own spin to the 1961 hit, she repackages it, rapping “Stuck on you, why don’t you come through, ‘cause this time around it’s all about you.” The hybrid version of the classic song embodies what the artist has done throughout the album, creating her own version of popular music. “I think this style was always in me,” she says. “It’s always been in me.”

With a John Legend tour already under her belt, Mapei is currently on tour with fellow Swede Lykke Li as a part of her American “I Never Learn” tour. The two have been friends for years and at one time shared an apartment in Bushwick. “We go way back, so it’s natural that we go on tour together,” says Mapei. Announcing the tour, Lykke Li gushed over her longtime friend, saying, “It is insanely symbolic to me as she’s been my idol ever since I saw her the first time when I was seventeen. She was the coolest thing I’ve ever seen and she dared me to follow my dream.”

With Hey, Hey Mapei is now able to do the same and provide a bone of support for a lot more people. When asked if everything feels kind of surreal, her response illustrates her spirit: “No. It’s just how the universe works.” At a time when pop music seems to be all about the ode to the derrière, it’s refreshing to have an album that’s affirming and positive without being overly cliché.

Yelena Perlin is an art director based in New York. She moonlights as a music fanatic. Say hello to her on Twitter @yelenalena.