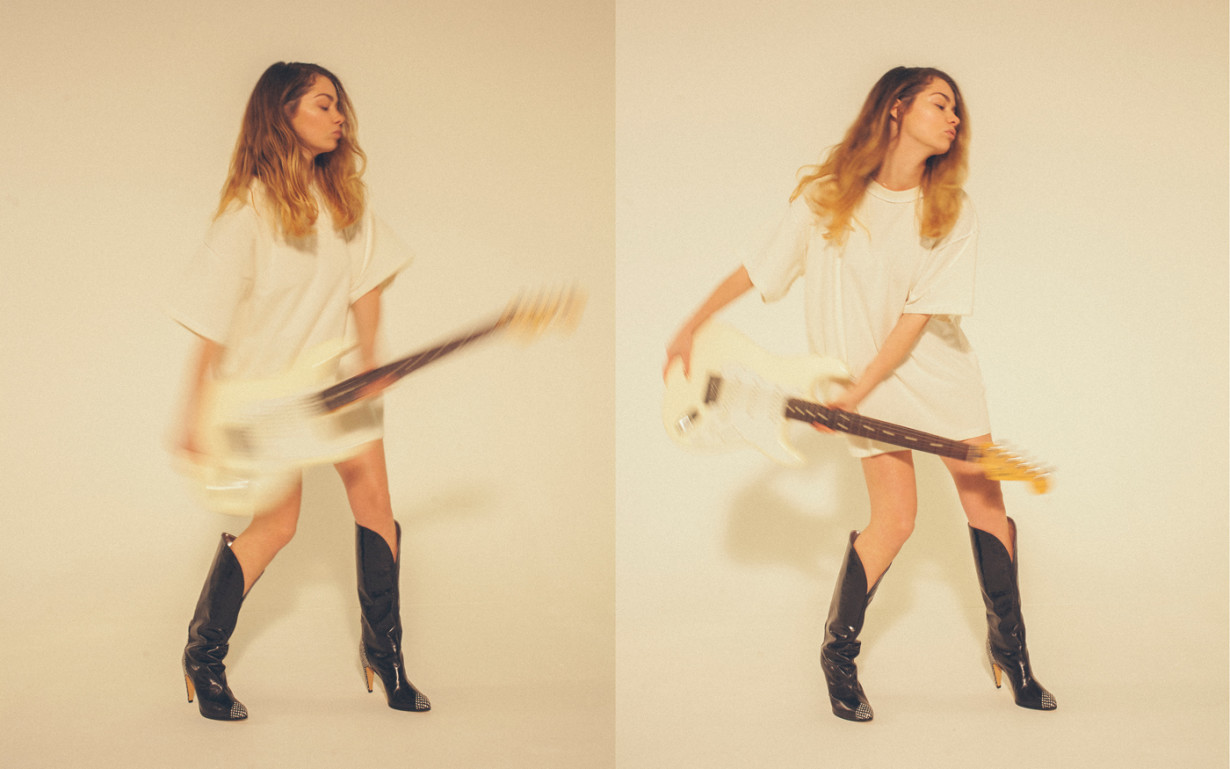 Minke, a 26-year-old musician from the UK, sprang out of nowhere with the independent release of two tracks last year. “Gold Angel,” in particular, caused the internet to lose its collective head and currently counts more than eight million listens on Spotify. The track sounds a little like the xx, opening with her croaking, intelligent lyrics lying cobwebbed over the sparse drum track and a single repeating note. Then the chorus comes in—“I’ll be your gold angel, if you want me”—and immediately lodges itself in your brain.

Minke’s materialization wasn’t as spontaneous as it might have appeared. At eighteen, she signed a record deal with a major label under her birth name, Leah Mason, playing good old blues rock, a distant cry from the sounds she’s creating now. Previously, she “just would bury the pop side” of herself, seemingly the side effect of working within the strict confines of a defined genre: All else is anathema. “I grew up a bit and I didn’t want to play blues rock anymore and just do the Hendrix solos,” she admits. “I wanted to branch out and develop to be a lot more relevant. I was a 23-year-old at that point and I wanted to write about the reality of what was going on.” The pressures of success may cause artists to move through the industry in a way that doesn’t feel altogether right, but, bravely, Mason reevaluated. “I just ditched that and then spent about a year and a half in Kent with my friend David—who mixed the EP—got cracking, and formed the idea of Minke.” Her music could be described as the lovechild of Haim and Jamie xx—pop-influenced, infectious, and open. Yet she has not quashed her blues roots: They still exist in the beautiful, meandering refrains of “Gold Angel” and the subtle solos in “Armour,” giving her songs a unique point from which to pivot. “When I’m at my best, you can sort of hear those bluesy influences, but it’s getting that balance of modern production and feeling more fresh and original,” she explains.

The success of Mason’s genre-blending comes in acknowledging the bounds of each separate genre. Over-prescription leads to limitation. Pop, she admits, has a tendency to be sometimes “derogatory” and “can seem sometimes, for me from the outside, very simplistic.” Similarly, while relating to her blues influence, Mason is careful to avoid the idea of “bringing back” what she calls ‘guitar music,’ emphasizing the quotes. “When I hear the words ‘guitar music,’ it reminds me of the Seventies and [I think of it] as beautiful and simplistic,” she says. “There’s something classic about that setup—bass, drums, and guitar—but it’s redundant now. We have all this technology. Some of this stuff those guys could only dream of. It’s insulting not to try to use it.” To continually create original, nuanced music in an industry deeply saturated by electronic sounds is where the di culty lies. Mason is proving it’s still possible by letting her blues beginnings bleed into her sound, following the lead of Billie Eilish, Charli XCX, St. Vincent, and others, all of whom she cites being fans of. Arguably, there’s a more progressive trend hidden in this guitar resurgence. If one considers the largely patriarchal history of guitar music, it feels fitting that a modern renaissance should be effected by a more female wave and can be seen when looking to bands such as Haim and solo artists like Laura Marling. “It’s funny, it never even occurred to me that it would be slightly feminist until I was like twenty-three,” she laughs. “I just did it and it was accepted and no one said to me, ‘Wow, you’re so good for a girl.’ It just was what it was. It wasn’t a feminist act. But then I’m not against more females playing it. It’s very cool and as it should be. We are starting to do that now with St. Vincent and Anna Calvi, and that’s amazing. I still can’t quite figure out why that hasn’t happened before. In a way, you could call it a feminist act, but I don’t.”

So the feminist sentiment in “Gold Angel,” which addresses the pressure put on girls to embody the most idealized form of beauty, is not an act of intentionality but more a reflection of the world as it exists now. It naturally seeps in. “It’s not something I want to express,” she explains. “I’m the best when I’m just being as honest as I can. That’s the best way for me to help people. I can’t help that I’m feeling like that as a woman, so I guess that will and does come out in my music, but I’m never trying to seem like that. I’m actually trying not to think when I’m writing. It’s just hard to avoid because it’s so prevalent.” As an artist who owes her success in part to the democratic functioning of the internet, you might assume Mason is a social media savant. Refreshingly, however, she admits, “I’m still coming around to the idea of social media. I’ve never been someone to put my life up on there. Honestly the need, the want, for so much is just really troubling for me and I’m guilty too. I want more—all the time. But we’re all brainwashed.”

Mason realizes the pressures of the digital age, but is simultaneously aware that we’re all guilty of putting the pressure on. So what is the correct way to navigate this conundrum as a modern artist? “I always imagine if Prince had Instagram and you’re looking at Prince’s sandwich for lunch and it’s like, Where’s the magic? Same with Lana Del Rey, I don’t know if I want her humanized,” she laughs, pointing to an example where the intimacy of social media may have back red. “I’m more into this fantasy world that they’ve created.” Fantasy over reality is the secret power of music and the music industry. People buy into the dream as much as the music itself. Where Instagram lies between those binaries remains to be seen and remains for the new artists themselves to determine. Mason refers to it as “the Wild West,” a lawless landscape. Jacket by Givenchy. Hat, stylist’s own.

Looking back from the beginning of 2018, Mason takes the opportunity to reflect on the previous year. “I think my year was made the day ‘Gold Angel’ came out, honestly,” she offers. “I’d been sitting on that for about two years and I’d played it to so many people in the industry who said it wasn’t good enough, so the fact it got any reaction was life-changing.” The internet brings with it the opportunity for an alternative rise for an artist without the need for huge record contracts and savage distribution deals. Minke, like fellow British singer Jorja Smith, may not ever need a record deal to elevate herself to the highest stratospheres. “It turned out for the best and honestly I don’t really want to get signed now,” she says. “I’m kind of happy that didn’t happen, because it’s opened my eyes to the possibility of being an independent artist. With [the release of] ‘Gold Angel,’ there’s so many pros to it, it’s got to be something pretty spectacular to give that up. For now, I get to retain creative control and I think early in a career, it’s so important to just show what you can do.”

As for the coming year? “I want to get triple the amount of songs out into the universe,” she says. “I want to put as many out as possible so people can make a judgment. I might not love the idea of putting out a million tweets a day, but I’ll give you every guitar riff I have!” Less tweeting, more riffng. A talented young artist, a fantastic guitar player, and, perhaps, a bastion for feminism, Minke is mining her blues-rock history and bringing unique and melodic idiosyncrasies to the deep pool of modern electronic music. She has been given a head start with “Gold Angel,” a testament to the track and, subsequently, to her. She now has the unenviable challenge of introducing the rest of us—the unpredictable ogre that is the public at large—to this talent.