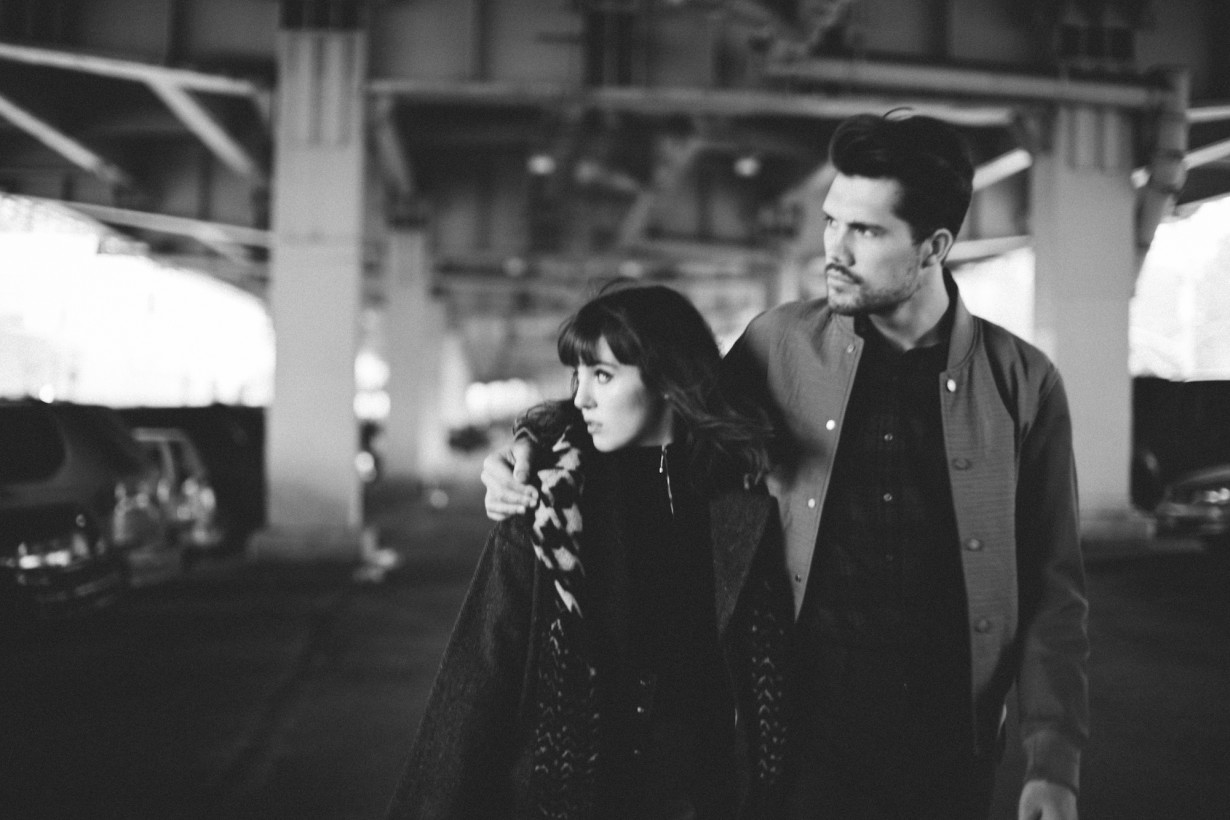 Earlier this fall, British pop duo Oh Wonder, jet-lagged but still glowing from a warm reception at two sold-out shows at Brooklyn’s Rough Trade, managed to find the time to speak about being thrust into the spotlight after the September release of their self-titled, fifteen-track album. First taking a moment to cozy up next to each other on an oversized, distressed leather sofa, the striking pair explain that Oh Wonder is simply the result of throwing caution to the wind in pursuit of a dream. Finishing each other’s sentences with a contagiously charming air of affection, they recount the beginnings of the band. Josephine and Anthony (they go by their mononyms) appear as perfectly fitted puzzle pieces, or perhaps musical soul mates, as they divulge the fact that they skipped merely getting their feet wet with the music thing. Instead, the two boldly quit their day jobs and started a band.

“I had just gotten a job at the book shop and Anthony was like, ‘Call them up and quit and tell them that you’re going to be a musician,'” Josephine recalls, a huge grin emerging across her face as she details the series of events that led to the band’s founding. “So I called and was like, ‘Hey, I can’t come into work anymore because I’m going to be a musician!” Before they joined forces, Anthony had been pursuing music on his own as a singer and producer, working out of a home studio in north London. Josephine was performing as “Layla,” and the two kept briefly encountering each other at various gigs across the city. The chance meetings brought them together, initially to produce Josephine’s solo work, but instead they connected over a shared taste in music and a passion for songwriting. With remarkable synergy, driven by faith in each other’s abilities, they began to produce music together, and their first hit, “Body Gold,” captured the industry’s attention.

Oh Wonder is a collision of techniques where classical meets the unconventional, pulling influence from Josephine’s longterm training in piano and Anthony’s methodical grassroots approach. An uncomplicated and minimal sound emerged; embracing notable transparency, their music sends a deeper message that doesn’t become overbearing. The tracks, laden with smoky synth, also happen to be quite catchy. They explain that they wanted to create songs that could be played on a piano alone and sound as good as if they were performed with a full band. The youthful pair is not trying to hide behind layers of production, but aims to create something real and tangible.

Without the demands of a nine-to-five job, the two young dreamers decided to put together a list of goals for the band. They started with no expectations, just “what if’s”. First was to gain an outlet in which they could release the songs they had written together and then hopefully tour the world, performing their music. In the two years since, Oh Wonder transformed a series of wistful aspirations into reality, leaving London for America, followed by Australia and a stint in Russia, and the stars have seemed to align.

“Humans by nature are such procrastinators—especially when you’re creative, because you don’t have any overarching deadlines,” says Josephine. “Nobody’s being like, “WRITE A SONG!” So we had to instill it in ourselves so that we would be creative and have an output and be productive.” Employing unrestrained encouragement and the occasional “kick in the bum,” the two clear the way for a continuous flow of creativity. The importance they place on taking care of one another morphs into their sound, blossoming with sincere lyrics and plush melodies.

They started getting attention by releasing a new song every month to their SoundCloud. Josephine recalls, “We had one song that we loved and we were like, “Let’s put it up,” and that was September last year. We enjoyed that process of writing that song.” Anthony chimes in, “It’s a really healthy pressure to know that you have to release on the first of every month, so knowing that you’ve got something to work towards is really great. It really pulls a song out of you.”

This method of releasing a new song monthly also pulled a massive following of fans towards them. Reminiscent of waiting for an episode of a favorite television show to air, the anticipation of each new song became irresistible. Counting down the days till the next release built an organic bond between the musicians and the ravenous consumers of their music. Josephine wears jacket and boots by Christian Dior. Blouse by Topshop. Socks by Prada.
Anthony wears jacket by Prada. T-shirt by Louis Vuitton. Trousers by Cos. Shoes by Dr. Martens.

In their music, Oh Wonder carefully confronts the complicated issue of rapid societal change, when the struggle between technology and authentic human interaction is hardly avoidable. It is all too easy to forget to look up from an iPhone (or whatever piece of technology happens to be attached to you) and actually be there for another person. Driven by the imperative of this pivotal development, Oh Wonder takes the time to reflect on how a daily dose of positivity can create a permeating ripple effect.

“I recently got a text from a friend from school who I haven’t spoken to for years and I think something not so great has happened today for him,” says Anthony, to offer an example of the comfort that some seek and find in the pair’s music. “One of our songs is called “Landslide” and the chorus is, “I’ll be there for you,” and he texted saying, ‘I just listened to your song and I feel a lot better, thanks for being there for me.'”

It’s no surprise that their music can serve as a salve, as the songs Oh Wonder crafts are clearly written with care and pure intentions. The goodness that saturates their music offers a hint of grace to the listener and reminds us of the importance of small gestures and love.

Oh Wonder is out now. Oh Wonder performs at Bowery Ballroom, New York, as part of their 2016 North American tour on January 29.