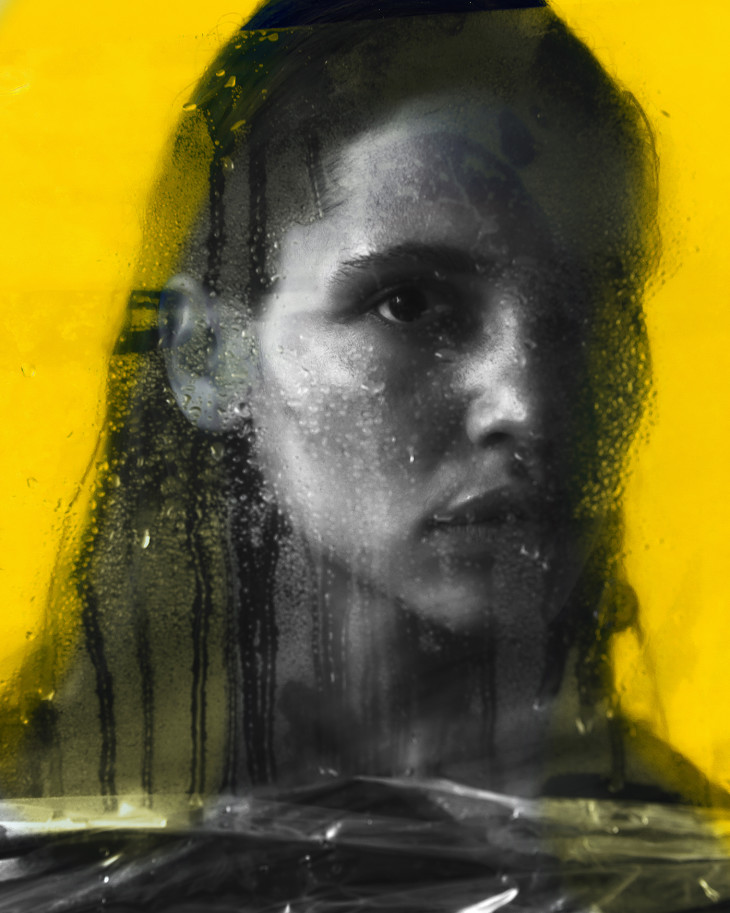 OKAY KAYA SHARES BOTH HER SELVES

Have you ever imagined yourself drawn as a caricature? That’s how Kaya Wilkins characterizes “the destiny of aging or growing.” “I think I’m growing into a parody of myself,” says the singer, who performs as Okay Kaya, over the phone from the Vancouver airport, reflecting on thoughts she had the day before (it was her twenty-eighth birthday). This tongue-in-cheek self-reflection is common for Wilkins and is the bread and butter of her honest and emotional songs. On her way to Portland on her tour with Amen Dunes, a couple of months after the release of her début album Both earlier this summer, Wilkins describes her caricature as heading towards knowing what it wants. “I just want to do my thing!” she proclaims.

The American-born Norwegian grew up in Nesoddtangen, a peninsula outside of Oslo, before relocating to New York nine years ago to give modeling a go. Wilkins sang and made music from a young age before pausing to pursue dance, “because my mom was like, ‘Pick a lane,”’ but ultimately came back to her first love at twenty-one, releasing her songs for the first time at twenty-four. Her moniker Okay Kaya is her embrace of the word ‘okay.’ “‘Okay’ is a super ambiguous word and it can mean so many things: Everything from zero chills to great to mediocre to just scraping by,” says Wilkins, “and that’s kind of fun to me, a word that has many meanings.” It is also a phrase she frequently encountered in life in a variety of iterations. “I just heard ‘okay’ and ‘Kaya’ in the same breath a lot of times,” she explains. “If you’re working, for example, it was like, ‘Okay, Kaya, dah dah dah,’ ‘Okay, Kaya, blah blah blah,’ and so I just put it beside my name.”

Wilkins started writing music because it was a therapeutic thing to do. “It was like a need, but I don’t know why that need was there,” she says. “It seemed very imminent and then…that was that…and I started it.” Her MIX VOL. ONE mixtape that she recorded on a friend’s tape machine and released on SoundCloud caught the attention of an indie imprint of XL Records. She went on to release a few tracks in 2015, including some with producer Rodaidh McDonald (Sampha, the xx, King Krule), but her relationship with management and the label didn’t go as she wanted, including an expectation from A&R for her to feign being single during sessions with producers. Severing ties, she ditched the studio for mostly working from her bedroom on her own and taking on a new venture—acting. Her first role ever was starring in Joachim Trier’s 2017 supernatural thriller Thelma. With no acting experience, she had to convince Trier that she was right for the role, something she was able to do by channeling the emotions of songs she had written, specifically about rejection. The intimate and pared-down Both is a reintroduction to the melancholy simplicity of her first mixtape and at the same time an expansion and exploration through storytelling. It is a raw glimpse into the mind and soul of someone struggling internally and externally with the ambiguity of her own identity—be it sexual, racial, or national—and with duality—of self, of emotion, of trauma, of growth—sonically expressed with campy grooves and bops. Wilkins’s main contributor on the record is Aaron Maine, better known as Porches, who co-produced some of the tracks. Minimal synth sounds and soft guitar chords compliment Wilkins’s ever-changing voice as it opens up the listener to a world that is based around this self-proclaimed duality. She describes the theme of the record as a mood—”looming,” as the feeling that “something’s hanging over your head,” which she evokes with the help of sub-bass and atmospheric synth sounds that compel listeners to move.

“I think a lot of the process is living and then reacting to…life,” says Wilkins, describing her method for writing. There is an ease and imminence to her lyrics that comes from their rote honesty. “Sometimes I just write down a joke at night, like at four AM,” she continues. “I’m stressed that it grows like a parasite.” Running somewhere along the border between laughing and crying, Wilkins’s lyrics are an exploration of emotions and a mode for her outward expression. “I would like to be able to relate to people and have people relate to me, and then make the world a tiny bit smaller,” she says. Forthright, forward, and unapologetically explicit, her words serve as the perfect means of narration for her introverted exhibitionist self. The coded “Glitch” masks a song about someone questioning her BDSM desires as a song about The Matrix, with Wilkins singing, “Tonight I want to be a latex mess/Tonight I want some hands around my neck/There must be some kind of glitch/In the matrix.” “I was hinting at the song being about The Matrix, but it’s not really about that,” she explains.”It’s about S&M, but it’s not really—it’s about someone who is trying to step out of their comfort zone, have an experience.”

As specific as Wilkins’s songs may be to her feelings, they are also moments in time, processed and trapped. She recalls performing “Glitch” for the first time live: “I was playing it and I was like, ’What mindset was I in here?’” For her, Both is an exploration of her “own ambiguities and mental state and experiences as a very confused human,” a state that, even if she is starting to understand, she’s still negotiating how to share; it’s an exercise in storytelling. Openly discussing her own battle with bipolar depression, one of the most powerful songs on the album is Wilkins’s coded conversation with herself in the album’s closing track “La Meg.” Written and sung in Norwegian, “La Meg,” which translates to “Let Me,” is her self-loathing battle with herself—a collection of spinning thoughts that, translated, feel like the downward spiral that looms in one’s head in a bout of insomnia; yet, sung, sound like a lulling folk song. “I count to one two three four five six seven eight nine ten until you let me leave you/I count one two three four five six seven eight, shut up/You do not have a voice/You are there no matter where I turn,” translates Wilkins, a little hesitantly, saying with a little laugh, “I like that people don’t know what this song says.”

Her relationship with this other part of herself, which she personifies as a twin in the five music videos for Both and describes as her “physical embodiment of trauma,” is one she’s working through. The self-choreographed videos for “Vampire,” “IUD,” “Dance Like U,” and “Habitual Love,” and the animated “Emulate,” all work through their storylines by employing a fictional twin dynamic as the visual representation of duality. Playing with symmetry, mirror reflections, and, in the illustrations of “Emulate,” Rorschach-style inkblots, Wilkins switches perspectives as she grapples with herself sometimes being the “other” twin in almost comical interactions. She cohabitates with, comforts, dances with, and drags by a single braid the twin who is sad and self-burdening. With Both, Wilkins takes the reins of her music and her image as an artist. There is a sense of empowerment that comes from assuming control of everything, down to photographing every visual, including the self-portrait on the cover. By admitting she doesn’t always have control, she gains control, and for as much as her feelings may loom, the songs are cathartic. Wilkins finished Both over a year before its release and she has already started to record new music. “It sounds quite different right now, I mean it’s just fun,” says Wilkins of her new songs. “It’s so fun producing and making music, so it would be a shame if it sounded exactly the same.” Clearly, Wilkins doesn’t shy away from new things. “Oh, I’m terrified of them,” she says, “but I think that’s the reason why I want to do them, because that way I can be like, ‘I conquered my fear.’”

Both is out now. Okay Kaya performs at the Music Hall of Williamsburg on November 1.