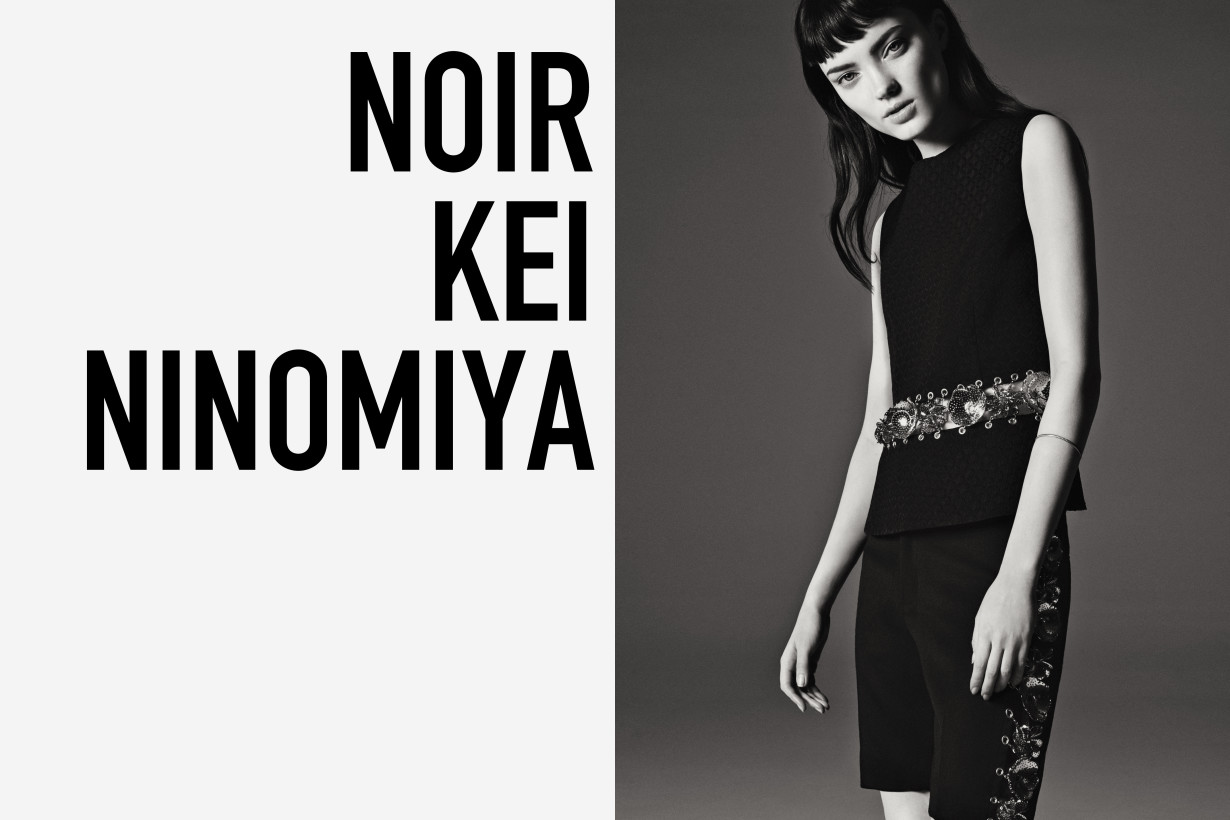 This story, all clothing by Noir Kei Ninomiya.

If you consider the eye-widening, body-morphing empire of Comme des Garçons an enigma—and, given its notoriously reticent founder and designer Rei Kawakubo, or the looming collection of suffocatingly monstrous knit bandages for Fall, how could one not—then what is to be said of the newest brand under the Japanese fashion house’s umbrella? Quietly previewed last year like a meteorite descending onto an unknown forest, Noir Kei Ninomiya arrived unexpectedly and was never fully explained.

Kei Ninomiya, the thirty-year-old designer of one of CDG’s newest brands, answers a desire for design with a question of the alternative. Instead of employing traditional knitwear, he might ask, How can that pattern be converted into forms? Or, on an even larger scale, How can one construct clothes without actually sewing the cloth? Perhaps it is this ethos for thinking past the margins of the expected that has earned the designer whispers of the title of Kawakubo’s protégé. Or maybe it is the pair’s shared resolve for the avant-garde. After graduating from Aoyama University in Tokyo, Ninomiya went on to briefly study at the Antwerp Royal Academy of Fine Arts, the prestigious training ground of some of fashion’s most emotive creators (the Antwerp Six, Kris Van Assche, and Bernhard Willhelm, among others), not to mention Vincent van Gogh himself. But mostly—probably—it’s due to the five years he spent as a patternmaker at Comme des Garçons—the job he left the Royal Academy for—before being tapped in 2013 to start his own line.

“As a patternmaker, there were occasions for me to interact with Kawakubo and discuss my views on creation,” says Ninomiya. “Those occasions developed into my personal creations and eventually a small collection. I had always been interested in expressing myself and my ideas. I have no idea how it came to materialize as fashion design, but this is where I stand now. [Noir is] a result of my continuous search of my pure interests at each stage of my life.” For his just-released Spring 2014 collection, Ninomiya’s experimentation lends itself to sharp laser-cut leather pieces with bold direction from hardware—grommets bridge together evening pieces and hook closures connect the dots to piece together a tough jacket. But it isn’t the materials, though rich in style, that matter to the designer as much as the conception and the surprises along the way.

“I am always searching for new and alternative ways to build a form. Whenever I start designing, I work with a concept, which consists of ‘a manner to build’ or ‘a philosophy,’ that I put into words, and stick to until the final garment or a form is made,” says Ninomiya. “Those elements have to be new, have to be something which was never tried before. Happenings and impromptu and unexpected results are important elements in the working process. I, myself, need to be surprised by my own creations.”

Of course, as the name implies, every piece Ninomiya touches is wrapped in a cool midnight black—a “rich color” for the designer. In many ways, it’s a bit facetious that a man so captivated by the shade, a color so associated with conclusion, would be so consumed with the quest for discovering something new. Archetypical conditioning has led to the association of black with an ending. Hades sat on an ebony throne. Films of all genre fade to black before a credit roll. Ninomiya says that black has variations of depth, and perhaps part of that—its ability to conclude—is what enables it to start again.

“There are always a few elements which attract my attention,” he explains. “There is this specific timing when blurry elements flying in the air light up as a clear path. Those elements might spring from the everyday life I lead, but those are mostly unconscious. I cannot draw a line to precisely specify the beginning and end of my design process, but I am always searching for the new, nurturing my past ideas and trying to develop them into something anew.”

Joshua Glass is the web editor of Essential Homme Magazine and has written for BlackBook Magazine, The Daily Mail, Dossier Journal, Société Perrier, and VIBE, as well as with countless other celebrity-addressed love letters.