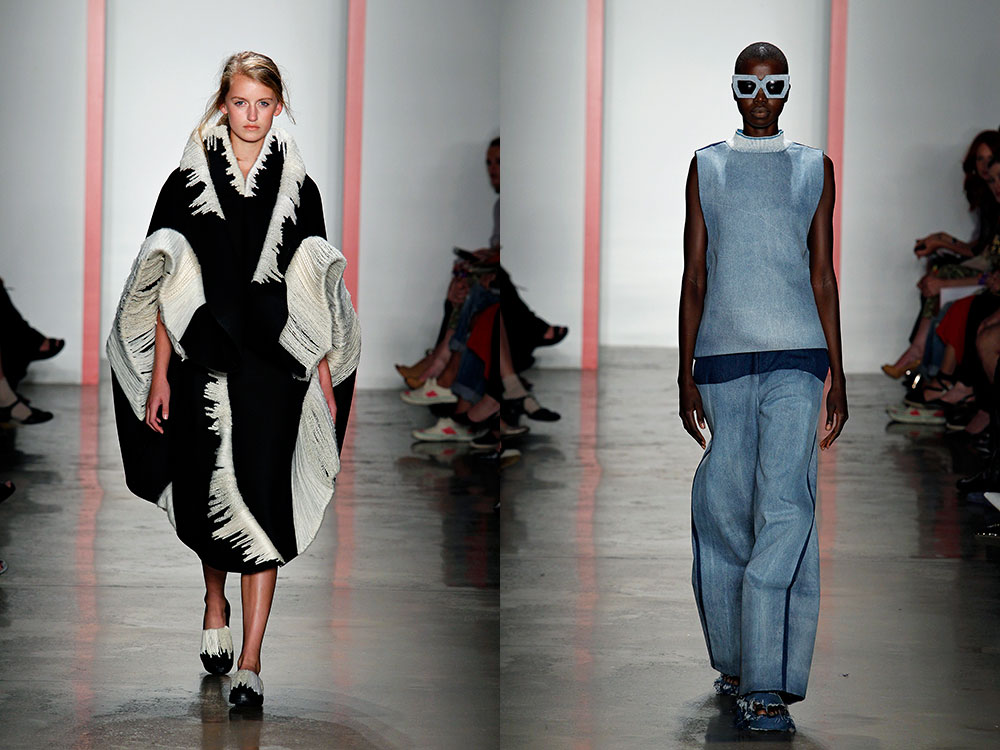 It seems like everyone and their brother is starting a fashion line these days, and in a city like New York—especially during Fall Fashion Week—it can be near impossible for even the most promising new designer to stand out. Fortunately for the sixteen up-and-coming designers showcased in the second annual Parsons MFA Fashion Design and Society graduate show, their alma mater’s imprimatur granted them a built-in audience, and they all kept up their end of the bargain, showing promise with their bold, roomy silhouettes and whimsical, futuristic patterns and fabrics.

“The students technically graduate mid-May and present their work within an exhibition environment, which includes their collections, portfolios, and any digital media they may have worked with to tell the narrative of their collection,” explains Shelley Fox, the program’s director. “The exhibition brings together their work within New York, but it’s important for them to have an international audience, which is why I always pushed to show during New York Fashion Week.”

Fox was tasked with developing the program from scratch in 2008, moving from London to New York to do so. Perhaps her international experience informed her emphasis on global exposure for her latest crop of diverse designers. “The body of students is highly international—approximately eleven nationalities within a group of sixteen students,” she says. The hand-selected students received guidance on their collections beginning around October of the previous year and worked on every design aspect (including their own fabrics) until their May deadline. They are often headhunted at the New York Fashion Week show: past graduates include Carly Ellis, who now works at DKNY, and Talia Shuvalov, head of knitwear at Opening Ceremony. Other alumni have landed jobs at Calvin Klein, Ralph Lauren, Donna Karan, Narciso Rodriguez, and Coach. A few designers forgo existing positions in favor of pursuing their own lines right away: Kaoru Oshima from last year’s class is working on setting up her own label in Tokyo, and Piotrek Panszczyk, who showed his work in the latest show, is joining forces with one of last year’s graduates, Beckett Fogg, to start a collaborative line in New York.

While all sixteen designers displayed cutting-edge talent and evocative designs, Fox says Jia Hua’s and Hannah Jenkinson’s creations are getting the most attention. “They are very different collections, but they are both obsessed with fabric developments, which makes their work stand out,” she explains. “It’s not so easy to copy at the level they are working at. It gives them an edge in an industry where too many designers are doing the same thing.

“There are a lot of collections which start with fabric development,” Fox continues. “Julian Guthrie’s printing, embroidery, and laser cutting all in the same piece of fabric; Claudia Li’s roving technique within her sculptured garments; Alison Tsai’s knitwear technique which she spent months developing; and Amelia Lindquist’s denim collection where she worked with a specialized denim wash house in New Jersey. They find a lot of their own sources for manufacturing and collaboration, and it’s all done in New York City.”

In addition to texture, each of the 127 looks of the Spring 2014 show were provocative in terms of structure and composition. And while the individual collections came together in a cohesive, modern show, each designer was able to shine in his or her own right. It may take some time to see what the world’s new class of designers has in store, but with the obvious abundance of originality and talent, it’s clear this is only the beginning.