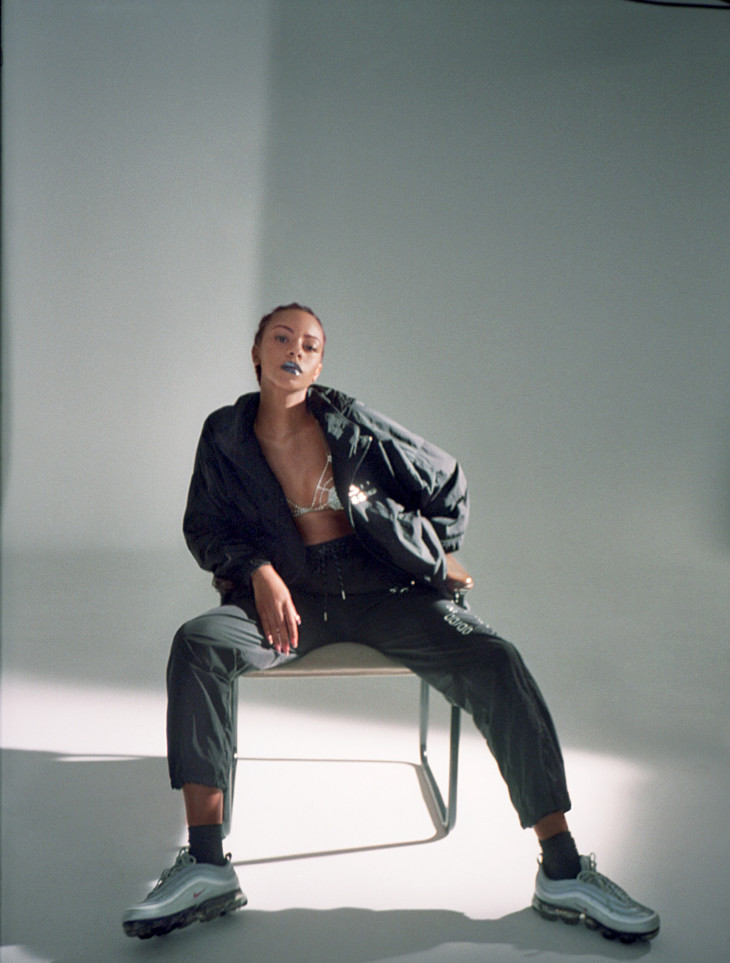 Jacket and trousers by Alexander Wang. Bra by X by NBD. Sneakers and socks by Nike.

RAVYN LENAE IS REDEFINING R&B ON HER OWN TERMS

At just nineteen years old, Ravyn Lenae is not afraid of declaring she’s going to be the kind of artist who will not be boxed in—unlike many singer-songwriters before her. “I think I’m a different person every day,” she explains. “Even if it changes slightly, I feel different every day. I want to be someone different every day.” But she’s also wise enough to understand how the music industry works, which historically tends to favor commercial hits over artistry. This tiresome narrative aside, Lenae speaks humbly for and to her fans through her exciting, exploratory music, which can only loosely be defined as R&B.

She explains, with an open-mindedness seemingly reserved for newcomers, “You can’t really blame people for liking a certain sound and then wanting that certain sound every time, but I try to encourage listeners to be lenient on their favorite artists and be open to what they want to do. Especially when you’re super young like me, you’re still trying to figure out what it is that you like.” Lenae, who is often compared to Erykah Badu and Kelela, hails from Chicago, where she attended the Chicago High School for the Arts, which boasts a competitive audition and admission process. Between classical training, a blossoming career, and touring the country, Lenae overcame “senioritis” and graduated just last year. Her recent Crush EP, a melodious, honeyed collection of R&B tunes, is the product of what she’s been up to since graduation.

Crush was produced by The Internet’s Steve Lacy, recognizable from Kendrick Lamar’s “Pride” (also known as everyone’s favorite track off DAMN). Lenae’s sound could be described as pump-up anthems for the introverted: full of enough quirk and color to accompany a head-bumping commute home, headphones secure as you head back in—not out. The best example is “The Night Song”: “For me, that song felt like a love letter to myself. I wanted every person who listens to it to feel like that.” After a quick moment of reflection, Lenae adds, “Some people like to shout it from the mountaintops, but for me, I like to think about it. I don’t go out that often. Most of the time when I go out, it’s because I have a show.”

With a funky flourish reminiscent of mid-2000s R&B, the song seems to open a portal into another world. Girl world perhaps. Lenae croons in falsetto, with lyrics that lend themselves to singing in front of a mirror. It’s a stark contrast to, say, Beyoncé, who seems to yell her reflections into militant formations of selfhood. Lenae’s particular brand of self-care is softer, quieter, more introspective.

Despite a mellow lifestyle, Lenae does enjoy talking to people and performing. But time to “charge up” (her words) is crucial. One gets the idea she downloads energy from making music, preferring to connect with people while in character, from a safe distance. As with any teen who grew up plugged into the world, it makes sense for Lenae to favor space to digest, internalize, and process—especially when career milestones keep happening before she can even legally drink. Jumpsuit by Chromat. Sneakers by Fila.

In the track “Computer Luv,” Lenae sings about longing in a fairytale-like duet with Lacy. Though she hasn’t directly experienced dating online as the title suggests, the song comes from one of the characters she likes to embody when making music. There’s a certain truth revealed with inexperience, a fact she readily admits. As if seeing the world for the first time, even heartache is cast in a ruby red hue: Why be afraid of feelings, when there’s beauty to be had in first times?

“I kind of like the idea of juxtaposition in music,” she says. “Combining very sad concepts with very pretty chords and vocal lines and harmonies, I think there’s something really cool about that. No one wants to feel horrible, but I do like playing with those themes and making it sound childlike when it’s really heavy.” Simply put, she’s found a working relationship that is just as magical as any Disney production. (Lacy is also another musical prodigy at only twenty years old.) Piercing, bopping, bouncing, whispering, swaying, harmonizing—whatever it is, it’s all sticking.

Lenae is currently on the road opening for Jorja Smith, touring the country by bus. There’s less pressure, she says, not being the headliner, and she’s hoping to make it a tour of inspiration for herself as well. For an artist growing into her own sound, with already so much to say, it’s safe to assume Lenae knows that listening is as important as being heard. Jacket and trousers by Landlord. Bodysuit by Norma Kamali.