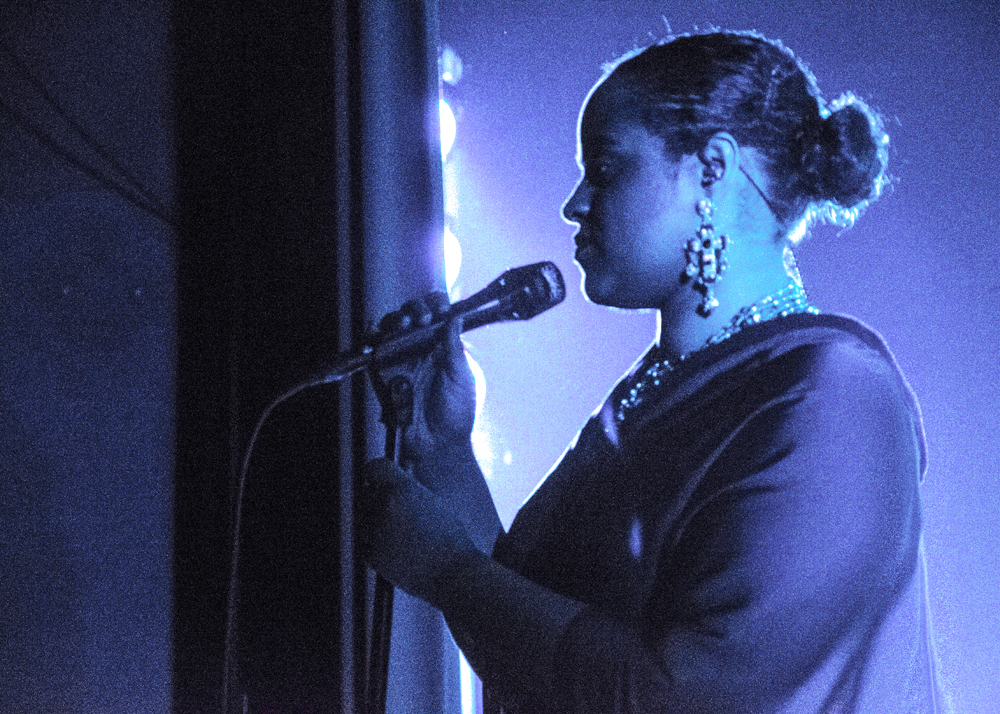 Draped in a kimono-like red robe drawn up to her collarbones layered over a matching scarlet turtleneck and sporting red claw-shaped nails, Seinabo Sey made her much-anticipated live US début last October during CMJ in New York. Instantly captivating the attention of everyone present, Sey enunciated every syllable, pointing her finger as she hit each note. Front and center, she didn’t need to hide behind heavy production; her voice was more than enough. “Those two times were really surreal,” says Sey, reflecting on the back-to-back nights over the phone from the road somewhere near San Francisco. Five months later, Sey is back in the United States to make her American television début on Conan and to play a sold-out mini-tour—all of which she managed to sandwich between her studio recording sessions. Still almost in awe of her growing success, Sey admits to being caught off guard by her growing audiences. “There are actual fans of music and people who come out just to hear the music!” she says with surprise. “They’re so much fun!”

Sweden-born and Gambia-raised, Sey moved from Halmstad, Sweden, to Stockholm by herself at the age of fifteen to attend music school. Coming from a musical family (her father is a successful musician in Gambia), she knew early on what she wanted, but her family’s influence wasn’t as direct as one would expect. “It was a free household, very creative,” Sey recalls. “It was more about just being in the environment. I had to kind of come up with my own way of doing things. Nobody told me, ‘You’re wrong.’”

After encouragement from rapper Afasi, for whom she had been a hype woman, and ready to finally give her musical career the push it needed, Sey emailed producer and fellow Swede Magnus Lidehäll expecting no real response. But Lidehäll, a ringleader for the Scandinavian female pop vocalist sound who has produced for Britney Spears, Kylie Minogue, Sky Ferreira, and, most recently, another Swedish vocalist—Mapei, did respond, and with him on board, Sey began working on the tracks that are now slated to appear on her debut album, out later this year on Virgin. “He has the skills to create anything I come up with,” says Sey, their first collaboration being her breakout hit “Younger.” “The pitched voice that’s the chorus—that’s actually my recording from my iPhone that he took.” Sey’s powerful vocals and encouraging lyrics on “Younger” attracted the attention of another Scandinavian musician, Norwegian producer Kygo, who turned the song into a massive hit that quickly topped American and Norwegian charts, garnering over fifteen million plays on SoundCloud and YouTube alone.

Both versions of “Younger” now appear on Sey’s six-track EP For Madeline, which was released earlier this year. Named in dedication to her mother who she says is “just always in my life,” the record is a taste of what’s to come on the album. The vengeful “Hard Time” is Sey’s favorite track to date. “I like the drums and I like the lyrics,” she says definitively of the song, which is based on a real former friendship. Brooding like a hymn spoken over a building scene of reverberation, Sey declares, “Thought you got away/This here ends today/You thought hell was hard/Let me show you now.” For Sey and Lidehäll, coming together meant “pushing boundaries and not really caring about genres,” which particularly comes out in the two previously unreleased tracks on the EP. The bare, Auto-Tune–led, neo-soul “You” is direct and controlled, while the keys- and choir-backed power ballad “River” expands Sey sonically into somewhere in the electropop realm. As she prepares for the future, Sey says the best career advice she received was from rapper Oskar Linnros. “The first time I met him, he asked what I wanted to do and I said I just want to sing, and he said, ‘It’s never about just singing,’ and that was shocking for me,” she explains. “But the more I do this, the more I realize he could not be more right.” Bright-eyed and excited, Sey is just finding her footing as she wraps up the album, which thus far has seen its fair share of delays—something she attributes to still developing her artistic identity. “Some of these songs I wrote two years ago, some of them I wrote six months ago. It’s hard to puzzle it all together, but I’m working on it,” says Sey. “The singing comes pretty naturally, it comes out in a certain way, but song creation is still pretty tough.” An artist’s first album is almost always the hardest one; like a debutante’s first dance, there is only one first shot, and while for Sey the pressure to finish the album and make more hits is on, her approach is wise. “We’re in the studio and we can’t fool ourselves,” she says. “You have to evolve and make a hit, but in another way.” So fans patiently wait, because unlike her hit song implies, Sey is definitely getting even better with age.