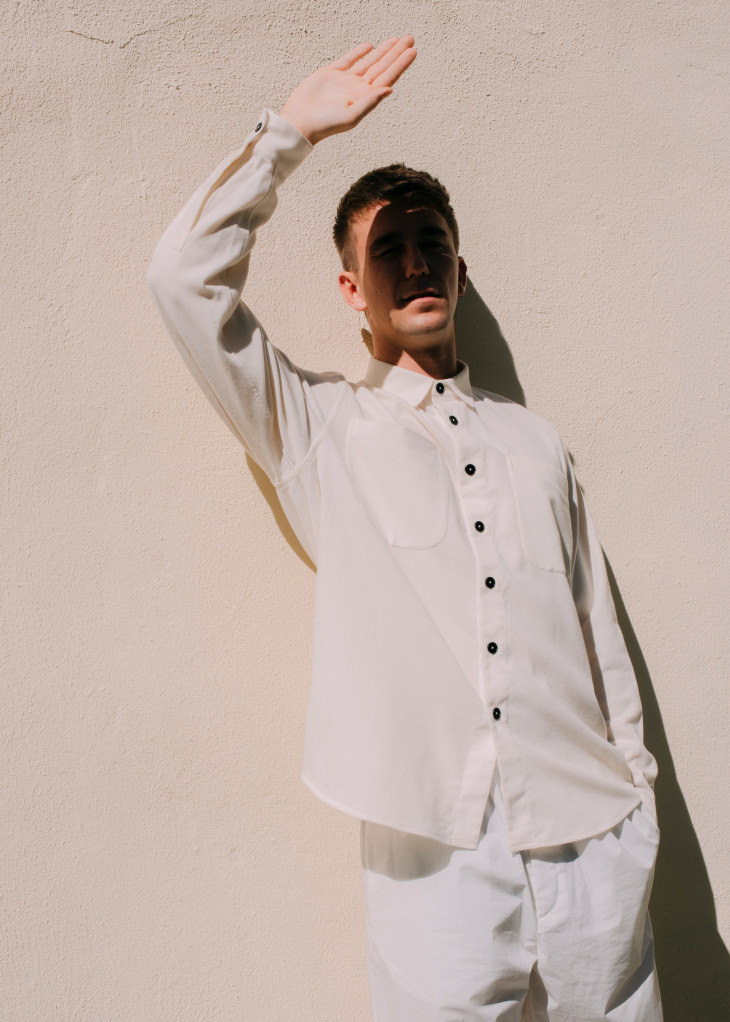 For the 24-year-old rising producer Sam Lewis, better known as SG Lewis, backstage at his second United States tour has involved more serious Mario Kart than his club-inspired music would suggest. Having recently wrapped up over a month traveling on a tour bus with a five-piece band, he released his latest EP, Dark, on Friday as he prepares for a string of Europe and UK dates to finish off his busy year.

There’s no argument that his downtempo electronic music is inspired by club culture, having been previously described in i-D as “if Bon Iver had gone to university in Liverpool and discovered club culture through a night out in Chibuku.” It’s little surprise then that his latest three-piece album project, Dusk, Dark, Dawn, aims to be the soundtrack of just such a night. “I found a lot of production-focused albums lacked a running theme,” he says, “and sometimes that works but, to me, I found them falling short and not really connecting because they’re lacking a central vein.”

The first EP, Dusk, from August, has obvious Eighties disco influences, Dark is more “house techno and hip-hop,” he explains, and then Dawn sounds like “the six AM comedown at the end of the night.”

Along with the EPs, Lewis has been releasing a series of singles this year. Notably, he released the song “Better” with Clairo in July, followed by “Hurting” with AlunaGeorge in August. “Better” is undeniably a disco-y summer hit, with a Nineties lo-fi music video to match, while “Hurting” acts as an introduction into Dark with its heavier rhythms and pulsating beats. Far from his now-highly-polished production, Lewis’s musical career started with amateur bands with his friends as a teenager. “My family is not musical whatsoever. I just started watching MTV in an era where the Neptunes were a huge thing,” he recalls, “so I started playing in bands in secondary school and I was always really into production. I never wanted to be a performer.” Pharrell, he says, has always been his “absolute hero.”

His first band was called the Superheroes, but he found himself trying to motivate a group of friends that would rather have been playing video games. “I love my friends to bits but my school friends aren’t musical at all really,” he laughs. “They would come round for practice and we would spend ten minutes practicing and about five hours playing PlayStation.”

From there, his solo career was born. Describing himself as an introvert who’s “more comfortable behind the scenes,” he found his musical place in London’s underground club scene. While he was too young to actually enter these clubs, he began watching tutorials on how to make dubstep at age sixteen and then started posting some “really shit remixes” online. That, he says, is how he learned to produce. By eighteen, his productions weren’t so “shit,” and YouTube channels such as TheSoundYouNeed began sharing his music, exposing him to millions of followers and launching his dedicated fan base. While Lewis has clearly established himself already as a rising producer to watch, he has his sights set on being “the best producer in the world”—though it’s clear his friends (the ones he used to force into bad bands) and family in Reading, where he grew up, will keep him grounded along the way. “My best friends are my school friends and I really don’t hang out with many other people,” he says, “but when I go back we don’t talk about music much and I honestly couldn’t tell you their opinion on it all. It’s just back to normal.”

When speaking with Lewis, it’s easy to tell that he is someone at the start of what will be a very long and successful career. Yet it’s equally clear he’s the exact same boy that started the Superheroes many years ago. He laughs about his “shitty paper round,” how his dad thought pursuing music meant busking on the streets, and how he was terrible at his audio engineering classes while studying in Liverpool.

He’s also extremely grateful and excited. Wanting to work on “as many projects as I can,” he promises constant reinvention and a seemingly endless range of new sounds. The self-confessed introvert wasn’t looking for any spotlight, but his last few months prove the spotlight has well and truly found him.

Dark is out now. Sweater by AMI Alexandre Mattiussi. Trousers and snekaers by Adidas.