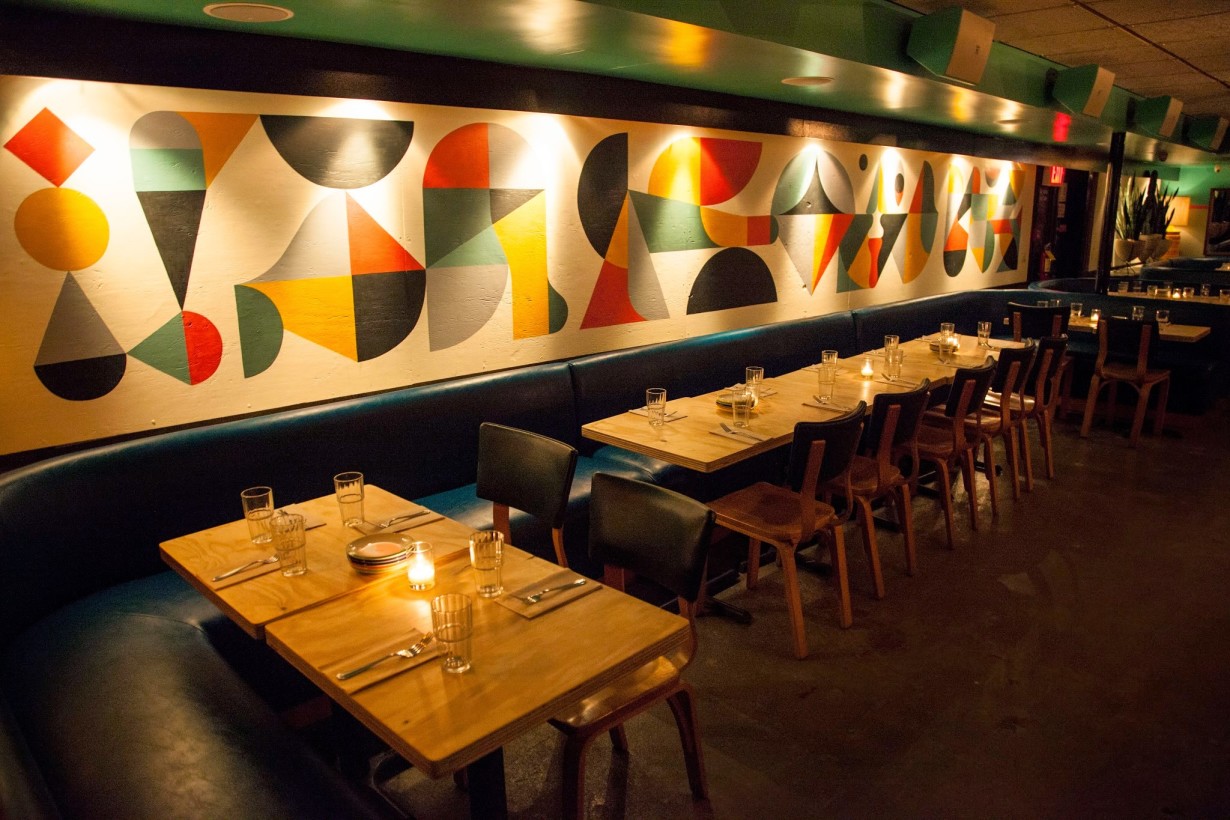 At Tico’s, the night starts out slow. Around seven PM, an hour after opening time, the lights in this subterranean speakeasy below Tijuana Picnic on Essex Street are still slightly raised. The color of the place is most apparent then, a retro tropical vibe playing tribute to the bar’s Mexican fare.

A bright, geometric mural by Madrid-based artist Remed covers the left-hand wall, the only indoor version of its kind. Designer Rob McKinley, who mastered beach-chic at places like Surf Lodge in Montauk, kept the interior coastal with aqua leather seating, cacti, green walls, and a resin-finished bar modeled after vintage surfboards, with Seventies-inspired bar stools and eclectic lamp fixtures in collaboration with the æsthetically inclined owners. “We wouldn’t want it to be a gloomy Lower East Side basement,” mentions part-owner Jean-Marc Houmard, of Indochine fame, who sourced several pieces of the décor himself along the way.

A string of chili lights line the mirrors on either side of the bar, a little Mexican kitsch that seems more appropriate for this space than the more polished dining room upstairs. “The peppers were not there originally, but then I thought it needed something a little silly and funky, so we added them after we opened,” Houmard explains. The underground space opened in May, while the restaurant upstairs, inside of which is Tico’s only entrance, was opened by the same team several months back.

It’s more of a dinner crowd at first, groups mainly, sharing light dishes created by Mexico City native, chef Alex Lopez, whose menu marries his childhood with slight influences from his work in Asian cuisine (Kittichai). “Everything is meant to be shared. It’s festive and not formal, which is the way I like to eat,” Houmard continues. “It’s funny, we have a lot of tables of girls. If girls like a place, for me it’s a good sign, because the food is light enough that they don’t feel threatened by it.” He takes a second to reconsider. “Or maybe it’s because the boys are so handsome,” he laughs, noting the attractive staff behind the bar. And those boys will be happy to acquaint you with a friend of theirs, mezcal, if you haven’t already met.

Coming in from the summer heat, the cocktail list’s “Smokin’ Maid,” crafted by veteran mixologist Jim Kearns (The Happiest Hour), is a nice way to start, as the cucumber and mint cools and refreshes while a spicy tequila brings back just a little warmth and the mezcal provides its traditional smoke to complement a snack of charred corn and cilantro guacamole. [One tequila.]

The lights dim in the following hours, but the color of the room never dissipates. Shades of greens, reds, and yellows glow around the space, from the drinks that line the bar with candles lit behind to the tea light holders on the brightly painted tabletops where lemon and lime wedges balance kimchi-topped short rib skewers on boldly hued, enamel plated dishes. “The plates are vintage from France, I found them online actually,” Houmard notes. “They don’t make them anymore and I bought every single one that I could find.”

After duck and foie gras empanadas, a “Mi Hermano” is stirred. Having the glass rinsed with a fernet, an herbal Italian liqueur, allows the Reposado tequila—aged for three months in a barrel—to serve as a digestif mixed with Dolin Rouge vermouth and chocolate and mole bitters. [Two tequila.]

A little past ten PM, the disco ball starts spinning, casting spots of light around the room on patrons spilling in from the restaurant upstairs. The music from the DJ booth keeps a loud but steady beat, reminding the crowd that a dance isn’t out of the question. A flight of agave spirits seems most appropriate then to keep up with the energy: a mezcal distilled with toasted corn, a sotol so earthy it transports you to the depths of Mexico with one sip, and a bacanora with just enough sweet citrus to flavor a brave bite of sun-toasted crickets and agave worm salt. [Three tequillaaa.]

Approaching midnight, seats at the bar are scarce. A blonde scrambles for half of a stool cushion with a friend while waiting for her “Sassy Señorita.” The bartender carefully lays fresh-cut strawberries over the salted edge of the pink drink for that extra burst of tartness. Even her impatience is quelled for the moment. “This was made with love, wasn’t it,” she smiles, reaching for the glass.

Before the night’s end, a bite of churros must be had before a tiny terra cotta saucer is passed with another shot of mezcal for the road. [Floor!]