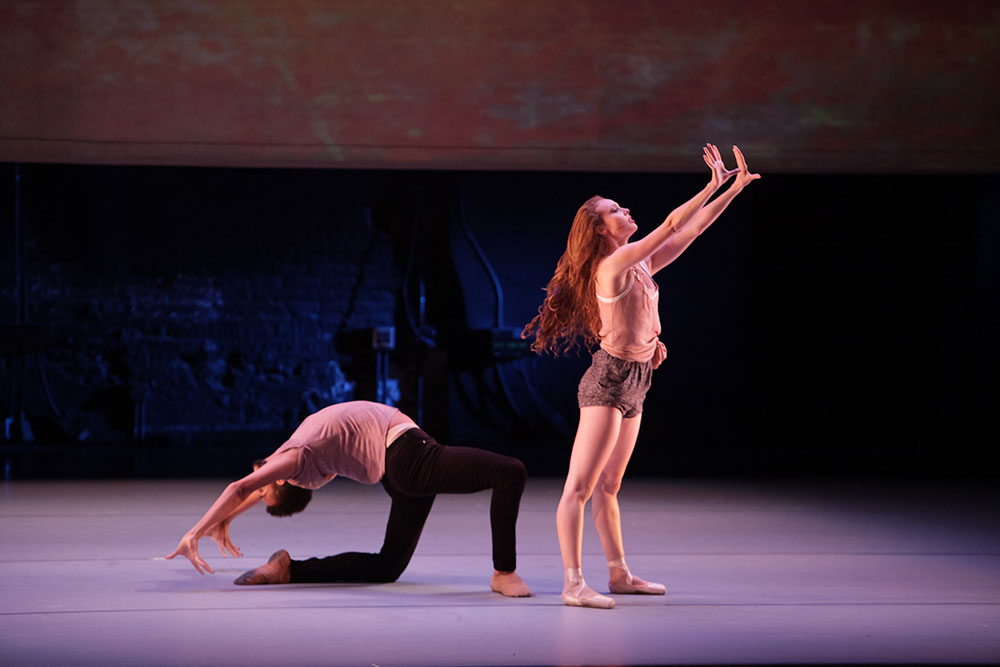 Just over a century ago, the impresario Sergei Diaghilev launched his Ballets Russes in Paris, bringing together groundbreaking artists across a range of fields to produce new work in support of dance. His company, which lasted two decades, helped introduce choreographers like George Balanchine and Léonide Massine to the world, but perhaps more impactful was its support of composers like Igor Stravinsky and Erik Satie, and visual artists like Pablo Picasso, Henri Matisse, and Coco Chanel—all of whom worked closely with the Ballets Russes and each other in an intensely collaborative process that proved far more effective than most other so-called creative partnerships. That same inclusive spirit, with its emphasis on discussion and co-development, animates the young company BalletCollective today.

Originally founded in 2010 as Satellite Ballet, BalletCollective is the brainchild of choreographer and New York City Ballet dancer Troy Schumacher. “The artistic vision is basically to bring artists into ballet in their own right and have their ideas and inspirations and æsthetics influence ballet,” he explains, “and then have ballet go and influence them.” Unlike most dance companies, where composing, choreographing, and designing can often take the form of solo affairs, BalletCollective works to build comprehensive relationships between its collaborators, with several iterations of each piece—and concomitant critique sessions—before the final result. “It is very effort-intensive,” Schumacher admits, “but you’re not out in the wilderness trying to find your own way. It’s very difficult to really be on the same page if you just have a conversation with a group of artists once and then go off.”

Appropriately enough, “The Impulse Wants Company,” Schumacher’s new work for seven dancers premiering tonight at the Joyce in Manhattan’s Chelsea neighborhood as part of its Ballet v6.0 festival of new companies, got its start as an original poem by Cynthia Zarin. “The premise of this is to create a three-pronged collaboration in which two people use the third medium as a common language and vice versa,” Schumacher explains, including the composer Ellis Ludwig-Leone. “Cynthia, Ellis, and I started having conversations about ideas that were important to us as related to ballet, as related to poetry, as related to music, but also most importantly to the world, and just what concepts were sticking with all of us. After three or four of these meetings, Cynthia went off and wrote a poem inspired by these conversations about the themes we talked about and about the conversations, and Ellis and I looked at the first draft of her poem and took that as a basic foundation.” In most other collaborations, Zarin’s role would’ve ended as soon as she completed her poem, but Schumacher says that the idea of BalletCollective is that her contribution should grow and evolve along with the music and the choreography, with the three playing off each other to produce a more cohesive final result. “It’s a very complicated way of producing the work,” he explains, “but it’s all created together within a process.”

BalletCollective has focused on these sorts of cross-disciplinary exchanges since the very beginning—in fact, Satellite first grew out of a partnership between Schumacher and the visual artist Kevin Draper. “We created one ballet based on an epic poem with some multimedia projections,” Schumacher recalls. “None of us thought the first version of it was a masterpiece, but we thought what came out of it was very interesting, and we all really felt as artists that we had grown through creating this one piece the same way we would have through creating ten works on our own.”

Schumacher says that providing a new sort of outlet, and a new sort of working paradigm, for artists is exactly what BalletCollective is all about. “It’s a very interesting process for all the artists—myself included—to both edit other art forms and be edited by other art forms,” he explains. That difference will remain the constant moving forward, even as the company grows and develops and evolves. But for now, Schumacher is happy to take it one step at a time, and the lengthy development period his works require actually dovetails nicely with his performance schedule at his day job. “Because I’m just doing this in my spare time from City Ballet, I only have this one production schedule a year,” he says. “We work for thirty-eight weeks out of the year at City Ballet, so that does leave a bit of time [for BalletCollective], but there’s a lot of time for planning. Right now I’m at the point where we have our performance, and then everyone in the group evaluates it, and we try to see what we liked, what we didn’t like, what could be better, and then take it from there. Everybody involved is very interested in continuing, so we just have to figure out the right way and how to do it and where to do it and when to do it.”