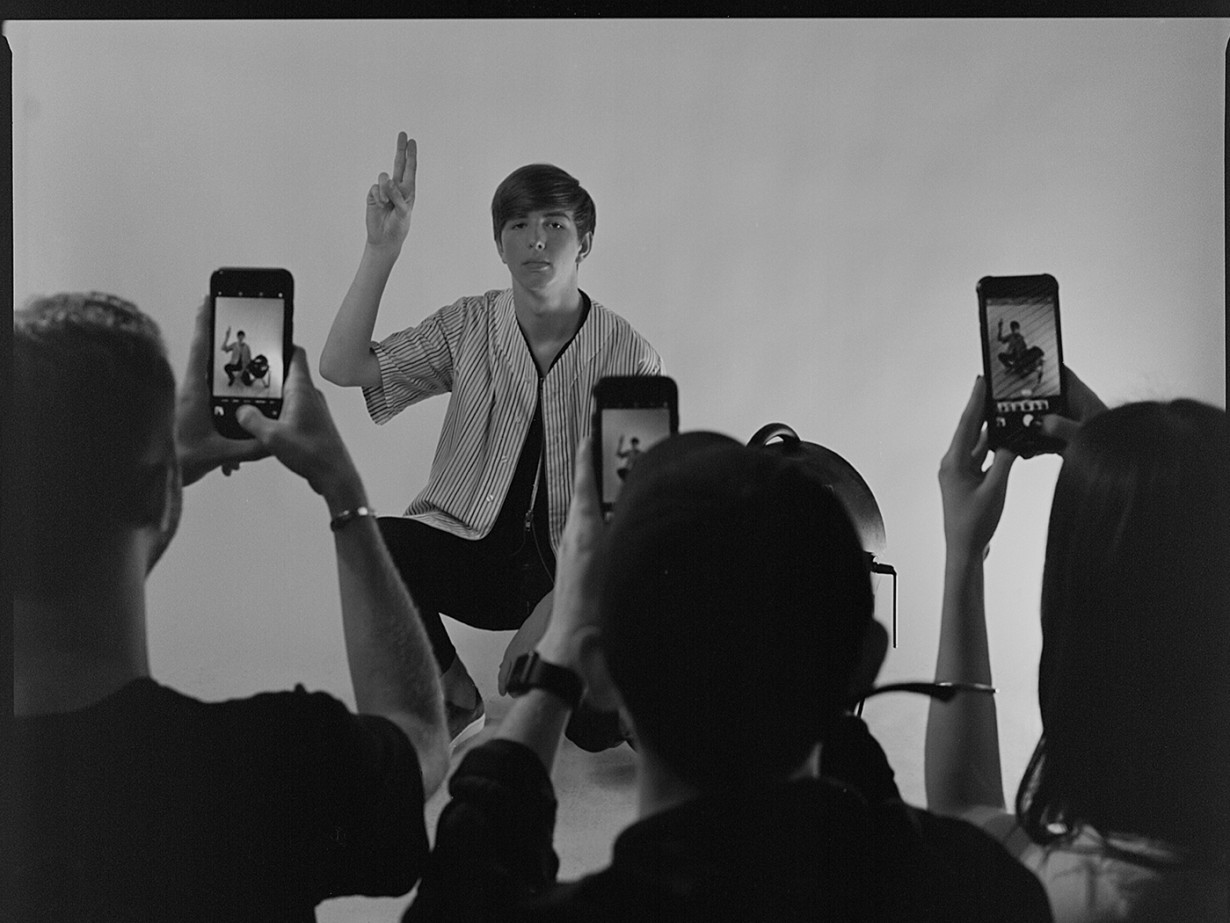 Shirts by Goodfight. Jeans by A.P.C. Sneakers by Vans.

While most twelve-year-olds are still a long way off from deciding what they want to be when they grow up, at that age, the Chicago-raised electronic artist and producer Ethan Snoreck, better known as Whethan, had already started doing it. Seven years later, he has remixed songs by Lorde, Zayn, and Brockhampton and notched several major collaborations, including “Love Gang” with Charli XCX, “Be Like You” featuring Broods, and “High” with Dua Lipa off the Fifty Shades Freed soundtrack. He’s supported the Chainsmokers, headlined at Lollapalooza, and brought the “Walmart yodeling kid” out on stage with him at Coachella earlier this year. Currently traversing North America on his Life of a Wallflower tour, Snoreck is clearly ahead of his time.

Listening to music before his school sports games, Snoreck began to “fall in love” with songs by Daft Punk and Skrillex at age eleven. From there came the desire to create his own. He downloaded GarageBand on his iPad and began “messing around with it,” something he says he quickly became addicted to, starting out with dubstep and moving successively through “little phases” of trying different genres. “But it always comes back to the electronic-like sound,” he says. Jacket by Lanvin. T-shirt by Vans. Shorts by Stussy.

Catching up with Snoreck before he embarked on his fall tour, it’s easy to see how his relatively short, and young, career has been so successful. There are some stories that could make anyone feel rather unaccomplished for their age, and his is most definitely one of them. He modestly puts this success mostly down to circumstance and SoundCloud. “For one, I think I was lucky enough to be alive in a time where you literally can just grab a computer and start making music at the age of twelve,” he says. “I didn’t really come from a musical background, so I think just having technology at my hands when I was super young and had a lot of time to just keep practicing was lucky.”

But just a few years later, he doesn’t think kids today have the same landscape. “It feels a little different nowadays,” Snoreck explains. “I feel like I was able to use SoundCloud to find a lot of awesome music that not a lot of people heard about but now there’s been such a big switch with streaming that it feels like most people aren’t discovering music on SoundCloud anymore.”

By the time Snoreck was in high school, he was set on a career in music, but it wasn’t until his junior year that everything began to line up and he realized he “probably wouldn’t have to go to college.” He came back home to graduate in between tours with the Chainsmokers. “That was pretty crazy because I hadn’t really done so much touring extensively and then went straight to a giant arena tour,” he says. “Being in high school at the time was a bit interesting to balance, but I pulled it off.” Jacket and trousers by McQ. Shirt by Stussy. Belt by Prada. Shoes by Dr. Martens.

Once he graduated, Snoreck moved to Los Angeles and began releasing tracks that streamed in the millions on SoundCloud. Some of his highlights include “Savage” with Flux Pavilion & MAX, “Superlove” featuring Oh Wonder, and his latest, “Radar” with British duo HONNE. “I’ve worked with a lot of artists who I look up to, so I feel very blessed to be able to do so,” says Snoreck. “It’s all down to the power of the internet, that’s how a lot of these collaborations actually happened.”

Looking ahead, Snoreck says he’s inspired by so many different genres that his dream future collaboration list is constantly changing. Right now, it ranges from Mac DeMarco to Steve Aoki because he thinks the combination of sounds would be something people “haven’t heard before.” Shirt by Toga. Sunglasses, stylist’s own.

And Snoreck’s become known for pulling out a few surprises. At Coachella this year, he broke the internet when his set featured Mason Ramsey, then at the height of his viral fame for a video of him yodeling Hank Williams’s “Lovesick Blues” at a Walmart. Snoreck admits it was a last-minute idea. “We basically just messaged him on Twitter and asked him to come to Coachella,” he says. “His aunt was running his social media and she liked my music so we made it happen like two days before. I feel like he’s the youngest person to ever touch the stage and probably made Coachella history in a sense.”

When asked why he chose to reach out to him, Snoreck says he felt connected to him being from Illinois and was amazed by his talent. “Basically I just wanted to be his friend and I hit him up,” he says. “He was really excited about it and didn’t even seem nervous, it was crazy.”

Snoreck also is no stranger to unique marketing tactics, having released a phone number on his social media for people to get an exclusive peek at his song with Oh Wonder. The number, he says, is something he still uses to talk to his fans. Mostly, they ask him to take pictures and send them back because they don’t believe it’s real. Shirts by Goodfight. Jeans by A.P.C. Sneakers by Vans.

With a team and numerous successes behind him, it seems like Snoreck is still having just as much fun experimenting as when he was twelve playing on GarageBand—and he’s just getting started. At age nineteen, he says he’s still usually the youngest person in every room, something he mostly finds exciting, but which can often have its downside. “I think sometimes because I’m young and I haven’t been in the industry long, there have been times where bigger managers or teams have wanted to take advantage,” he elaborates about an issue he says he often speaks to other close friends in the industry about.

But after being thrown straight into the music industry out of high school, Snoreck is far from complaining. “It’s all been eye-opening and also just amazing that now I’m exposed to the whole world,” he says. “I’m honestly just having a blast and it’s a crazy feeling that people still support and want to follow it all.”

Whethan’s Life of a Wallflower tour comes to Concord Music Hall, Chicago, on Friday and Saturday. Left: Shirt by Salvatore Ferragamo. T-shirt by Topman. Trousers by McQ. Shoes by Dr. Martens. Necklace, talent’s own.
Right: All clothing by Stella McCartney. Belt by Diesel. Sneakers by Ports 1961.