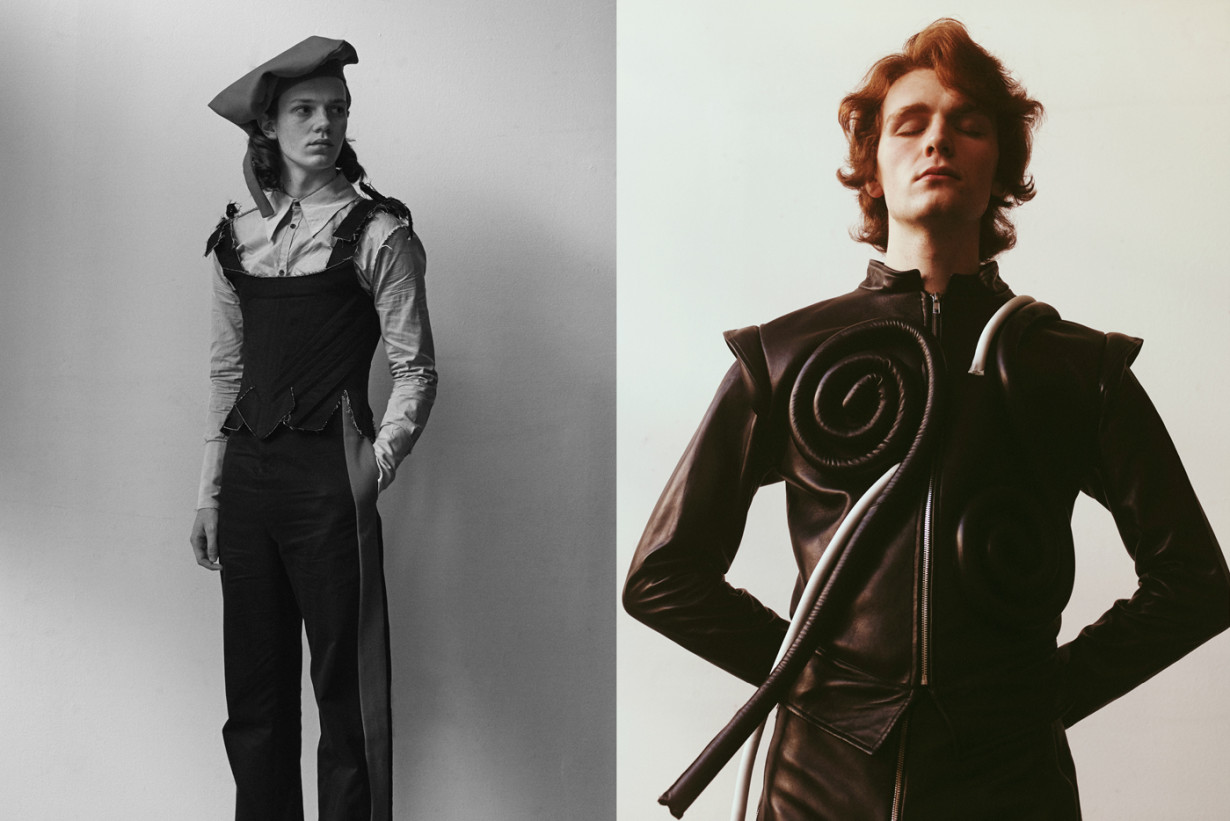 All clothing and accessories throughout by Charles Jeffrey Loverboy.

Gender-bending, avant garde, esoteric—when it comes to describing Charles Jeffrey, there will never be enough words, because the designer is about so much more than just fashion. Since he burst onto the scene in 2015, the 27-year-old has created what could only be called a movement. Through the diva dance music at his club night Loverboy, the flamboyance of his dress, and the theatrics of his shows, he has quickly brought the fun back into fashion.

Those legendary events at Dalston’s Vogue Fabrics are now defunct (save from special occasions) but they made enough noise to earn Jeffrey comparisons to the likes of Alexander McQueen and John Galliano, two other British designer darlings who established their labels through the cultish Nighties club scene. It’s refreshing, really, because in a world of contrived content and Instagram curation, the organic progression of a fashion brand now feels almost impossible. But does Jeffrey find the label a little demeaning? “At times the ‘club kid’ bit does bother me as it suggests I’m not hardworking,” he admits, “but I appreciate it is the birthplace of the brand. Plus, I’m not afraid to throw shapes on the dance floor and pull a look with my fellow creatures of the night so I guess it’s somewhat appropriate!”

This upbeat approach to life is what makes Jeffrey so enchanting. And it’s got him places—along with his Renaissance good looks and a no-fucks-given attitude to fashion, of course. In the halls of Central Saint Martins, you couldn’t go long without hearing his name uttered by students or tutors, so it was no surprise when Lulu Kennedy snapped him up in 2015 and brought him into the fold of Fashion East’s MAN incubator, a move that springboarded his career. Less than two years later, Jeffrey stepped out on his own to immediate success, winning Emerging Menswear Designer of the Year at the 2017 British Fashion Awards and finding himself nominated for the LVMH Prize earlier this year. Life wasn’t always so charmed for Jeffrey though. Growing up in Scotland, he suffered through bullying and hate crimes for his sexuality, his wardrobe choices, and even the color of his hair. “It wasn’t until I got to CSM and I saw everyone expressing their own style and individuality that I felt I could fully develop my own identity,” he remembers. Still, these “growing pains,” as he calls them, are fodder for ideas because, as with most artists, designing for Jeffrey is a cathartic process. “I think it is important to utilize pent-up emotions to help stimulate the creative process,” he says.

This alchemy felt particularly poignant in his fiery Fall 2018 collection, for which Jeffrey converted his anger into energy and channeled it into an emotionally charged offering aptly entitled Tantrum. The title was taken literally at London Fashion Week: Face-painted models opened the show by shrieking, shouting, and stamping their feet before the lights flashed on to reveal the line-up. All the Loverboy signatures were there—the argyle knits and tartans inspired by his Scottish heritage; the berets and the shrunken, “drunken” three-piece suits that nod to neo-Edwardian punk. He took the tailoring a little further this season with asymmetric blazer dresses, neat peplum pencil skirts, generously pleated pants, and oversized suits that were either slashed all over or cinched dramatically at the waist. But it was the typical Jeffrey quirks—tiny corsets, towering platforms, sculptural headdresses, wings, and voluminous sleeves inspired by the animal instinct for puffing up with anger—that made the show so delightfully distinctive.

This collection explores important questions about the queer psyche and the tendency toward extravagance and performance as a response to societal pressures and conventions. Unfortunately, there won’t be any answers anytime soon, Jeffrey thinks: “There is still a great deal that needs to be done to fully understand the LGBTQI communities’ mental framework and how old-fashioned values have affected this.” He adds, “We have advanced in terms of acceptance, but we still need to raise awareness around the identity struggles these people face.” That’s exactly what Jeffrey has been doing since day one, raising awareness with his dismissal of gender constructs before androgyny became a superficial trend snapped up by marketing teams all over the industry—and it’s what makes it all so much more than a simple fashion label. “I hope that the Loverboy brand offers a security blanket to those who are isolated from normality because of how they feel, what they look like, or how they choose to express themselves,” he emphasizes. However, as important as these aspects are to Jeffrey, so is business, which is something he has been thinking about from the beginning. “When I was studying I had several retail jobs and loved looking at the value of clothing and analyzing what makes a garment desirable,” he says. It paid off—Loverboy is stocked at luxury e-tailers like Farfetch, Dover Street Market, and Matches (where his womenswear line just dropped) and his playful illustrations were even woven into the jacquard cheongsams in Alexa Chung’s anticipated début collection last year.

Despite these achievements, Jeffrey stays true to his art school roots by balancing commercial and creative projects, whether that’s curating exhibitions, choreographing dance performances with the artist Theo Adams for his shows, creating short films with Robert Fox, or producing zines with photographer Thurstan Redding. Today’s demand for a side hustle is only heightened when you work in the creative industries, which begs the question whether Jeffrey is victim to today’s fingers-in-many-pies pressure. “For some designers, the clothing is enough, but for me,” he muses, “clothing is only a part of the world I am building around me.”

Still, in this crucial stage of his career, winning the LVMH Prize would certainly ease the pressure. “It will help me to create product for a wider audience and will allow a level of financial breathing space so I can think more clearly about the future direction of the brand,” Jeffrey explains. It could be just the thing that propels the designer beyond London’s stage and allows him to show other like-minded, and not so like-minded, people his wonderful world. Because let’s face it, we all need a bit of the Charles Jeffrey touch in our lives.