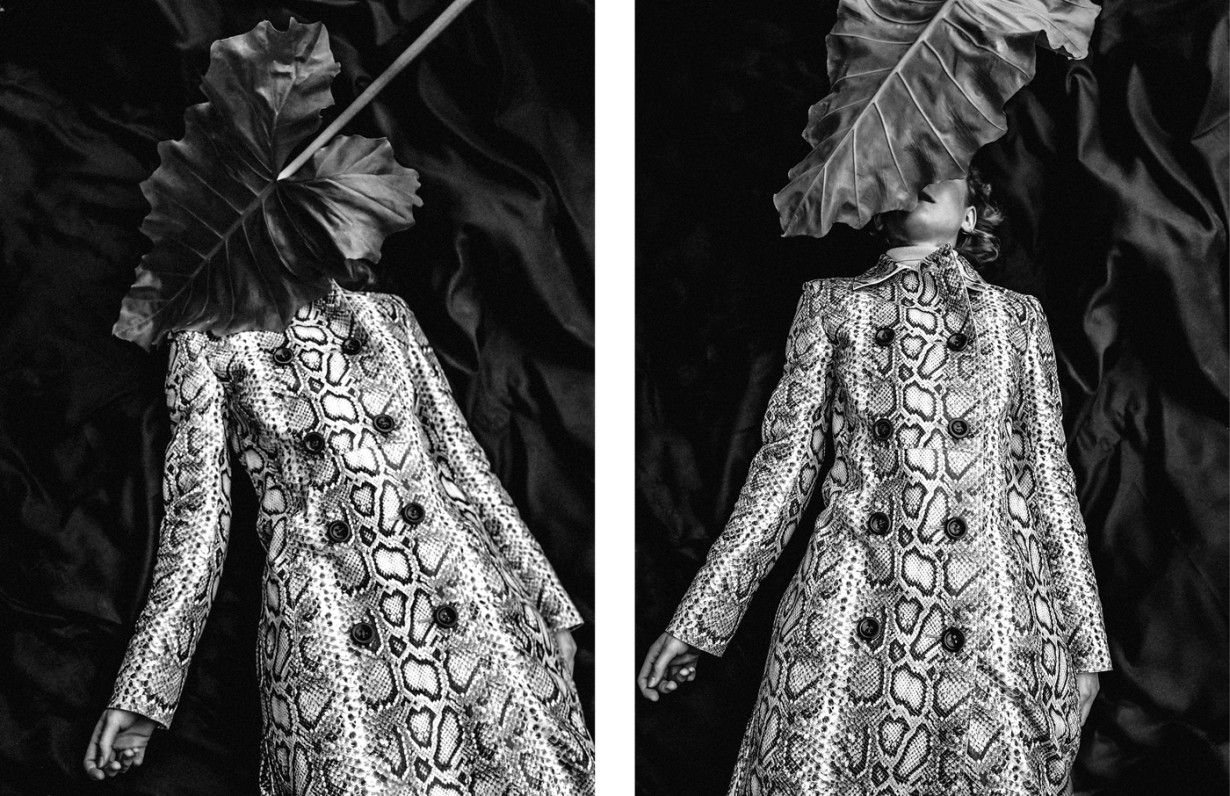 All clothing throughout by Kwaidan Editions.

On the surface, the clothes from Léa Dickely and Hung La, the designers behind the 2018 LVMH Prize-nominated label Kwaidan Editions, are just that: clothes. But the duo, whose offerings span from elegant pantsuits that pop in loud cartoon colors to dresses that skim the body in priestly black and a workwear coat that appears to be crafted from fetish-esque patent leather (but is actually a lightweight vinyl), seek to imbue their designs with something more. “We do fashion which is very real, but beyond the product, there’s so many levels of spirit that we try to infuse into the brand,” says La.

Husband-and-wife duo Dickely, thirty-four, and La, thirty-nine, are not content to work with merely what is in front of them. Instead, they happily—and deftly—juxtapose layers of the physical and the metaphysical in each piece. They say the word ‘uncanny’ often comes to them, a term that aptly describes the unexpected, almost surreal touches that permeate their collections, such as exposed seams or materials that play with how fabrics are supposed to look and feel. The label’s name comes from the 1965 Masaki Kobayashi-directed anthology film Kwaidan, which was nominated for the Academy Award for Best Foreign Film and which tells four short Japanese folktales in brooding, saturated colors. Dickely says her favorite is the tale of a man who ends up marrying a woman he doesn’t realize is a female spirit who has previously appeared to him in a snowstorm for the story’s hand-painted sets and “how looming [the spirit] is,” suggesting a ghostly presence that is always there. “I think the movie for us speaks to the unspoken,” she adds. “There’s a lot to take from something that’s not seen.” But if the name for their brand speaks to the ephemeral, the clothes are the opposite. La, who worked with Nicolas Ghesquière at Balenciaga and Phoebe Philo at Céline, and Dickely, who previously designed prints at Balmain and Alexander McQueen and consulted for Rick Owens in between, create for women who are strong. For La, it was Philo who instilled this ethos into him. “Phoebe was very direct,” he recalls, adding that she taught him to design what a woman would want to wear. “You can look at that as a constraint or an opportunity,” he says.

Dickely, who initiates the creative process, says designing allows her to explore her own conception of what it means to be a woman today. “It’s an intimate process of designing this woman—it’s not even just designing, it’s looking for her, it’s trying to find what she’s like, who she is. It’s research,” she says. “Every collection is a new way of looking at [who she is].”

The duo met twelve years ago while studying at the Royal Academy of Arts in Antwerp. La, who was born in the United States, had studied computer engineering before that and studied fashion in America and Italy before heading to Belgium. Dickely came from a fine arts background. Even then, she vaguely knew that she wanted to start her own label, she says, but “I personally didn’t think about it too much. After school you just want to get a job and experience.” They moved to Paris, and then to London when Dickely began working for Alexander McQueen.

Two years ago, they realized they were suffering burnout, and had to consider if they still wanted to continue working in the fashion industry. “There was never an ‘aha’ moment,” says La, speaking about the moment they decided to found Kwaidan Editions. “It just kind of happened. We felt the best way we could empower ourselves was to take control and start our own brand.” Since Kwaidan Edition’s beginnings, both designers have made good use of their experience. La says he admired Ghesquière and Philo for the values that permeated their respective labels and it was important to both him and Dickely that their own brand have a similar integrity. “We have all these years behind us, we have more confidence, we know what we like and don’t want, we know what we don’t want to repeat,” he says. “We have time to make up our minds for what we want for the future.”

For the next stage of the label, Dickely and La are interested in growing the brand both in business and in concept. For them, clothes are part of a bigger story, one that is cinematic in power and architectural in scale. Though eventually they’d like to do presentations and runway shows, for now they are extending their vision through installations, including one that recently finished at Dover Street Market in New York. Created around their Spring 2018 collection, the pop-up work referenced French spatial artist Dominique Gonzalez-Foerster and the motels they stayed in on their first road trip across America one year into their relationship (when asked for their best road trip advice, La says: “Don’t use your phone, use a physical map and be open to experiences”). Their Fall 2018 collection also ties heavily into ideas of place through elements such as fake fur and a scenic wood landscape print that lifts the customer to a distinctly David Lynch-ian location. This spatial awareness is perhaps the most fitting way for them to grow, as they evoke the genius loci—the spirit of a place.