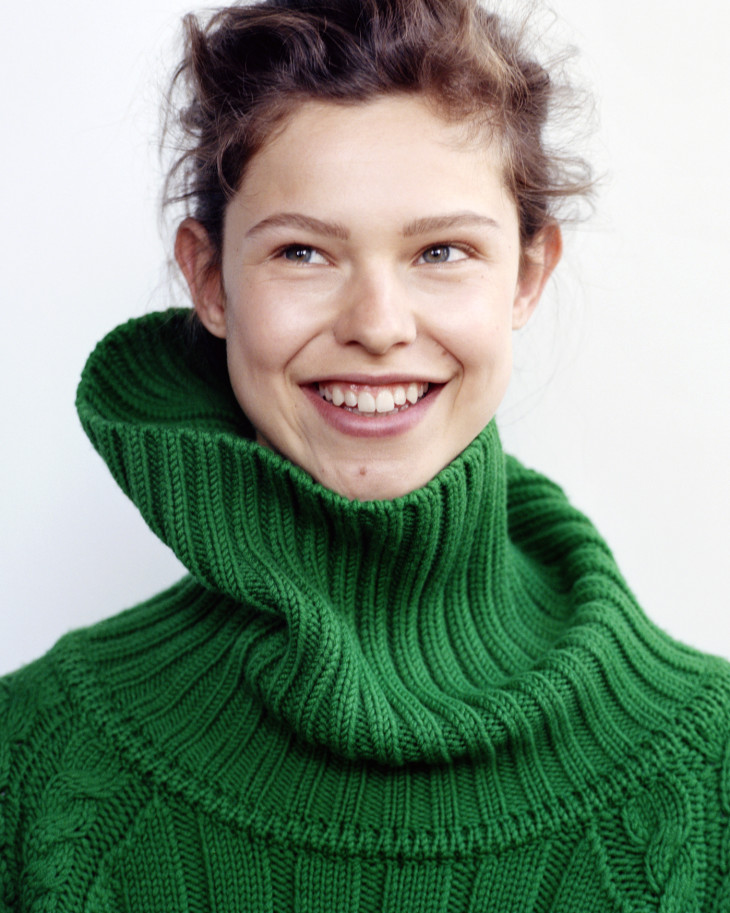 All clothing throughout by Matthew Adams Dolan.

Matthew Adams Dolan is both subtle and preternaturally skilled—a rare combination in today’s hyper-saturated, personality-driven fashionscape. Quietly confident in his approach, the young designer has garnered an impressive following among both regular women and celebrities such as Rihanna since his brand first launched in 2015. His ability to cut a garment is second only to his intuitive sense for wearable theatricality, producing clothes that make a statement without being impractical for modern life. So when Dolan was named one of this year’s LVMH Prize finalists, it felt like a natural progression.

Based in New York, Dolan has lived all over the world, from Japan to Australia, which perhaps accounts for his well-rounded perspective on what women want to wear. Despite his nomadic childhood, though, the designer says that he is most focused on the evolution of American style, something he has been obsessed with since school and which has run as an undercurrent through his work ever since. Initially, this fascination found expression in the reinterpretation of that classic American uniform, denim, but has more recently evolved into a utilitarian approach to construction. “Denim is and, I foresee, always will be an integral part of the brand’s DNA, because I feel like it is such a perfect vehicle for exploring these ideas of what American style is, its dualities, its familiarity,” Dolan explains. However, the designer says that, beginning in Spring 2017, he decided to look at tailoring as a natural step forward for the brand. “If you look at the history of American sportswear figures like Bonnie Cashin, Claire McCardell, and Calvin Klein, it has always been about this idea of a wardrobe—it’s clothing for people to wear, so it’s about this idea of emancipation, ease, or democracy.” Bra by The Great Eros. With that in mind, Dolan says that he hopes to explore what the future of American fashion could look like. “I like the effortlessness and sense of ease that are such a strong part of the heritage of American sportswear, so would hope that’s something my customer is able to identify with,” the designer says of where he hopes to take the brand. “In terms of the message behind the clothes, I think a lot of what I am interested in is looking into this idea of heritage and subverting signifiers of the American wardrobe as a means of exploring a diverse range American identities,” which is as much good business as it is good design.

The LVMH Prize confers honor and prestige on all its finalists, but one of the most valuable advantages of the process is the opportunity to think critically about the business side of the brand. Although Dolan admits that it isn’t the juiciest topic, he feels that the commercial aspect of fashion is just as—if not even more—important than a designer’s creative vision, but is, unfortunately, something that still isn’t focused on enough in fashion schools. That shortcoming is exactly why the designer believes that the competition has been such an invaluable experience. “At this stage [of my brand], it is still about approaching each day as it comes and making smart decisions about how to move forward,” he explains. “It is boring to talk about in interviews, but ironing out any wrinkles in how the company operates [is important], so that when it is able to expand, there is a solid foundation and systems in place for it to function to the best of its ability.”

This sort of pragmatic wisdom doesn’t always come naturally to young designers, but then again Dolan isn’t just any young designer. For one, he is humble in his dedication to craft and draws upon the help of others wherever possible. “I think for any young brand, mentorship is such an integral thing and I am so grateful for all of the advice, encouragement, and support that I have received,” he explains. “It reaches far beyond people in fashion, from friends working in different industries to my parents, peers, and other designers.” What is interesting about Dolan is that he doesn’t take an insular approach to his work, but instead focuses on the importance of collaboration. This community-based approach certainly reflects the future of fashion. “I think the industry is so based upon this idea of community and I really do think that it comes down to people working together—because nothing can come to fruition from just one side of things,” Dolan explains. “I think the LVMH Prize offers such a unique platform because it allows access to and interaction with people who are operating businesses at the highest level of the industry, and there is so much knowledge and experience that can be gained from this kind of opportunity.”

A big part of Dolan’s success to date seems to have come from this reverence for collective communication. “You need to just soak it all in,” he says. “It’s about listening to your teachers—and not always having to agree with them, but listening. It’s about being open to encouragement, advice, and criticism from people.” Some of those people have been his peers, while others have been stylists like Alastair McKimm—one of the first to embrace Dolan’s clothes—or boldfaced names like Rihanna, who has always been a big supporter of the brand. Being able to see how this incredibly hard-working and passionate woman works is one of the things Dolan feels most fortunate for, as with all the stylists, photographers, and makeup artists that have become like family. “Being surrounded by hard-working people who all have their own visions and goals is the best motivation,” he says, a sentiment that perfectly sums up Matthew Adams Dolan: a modern designer whose democracy lies in his design. Tights stylist’s own. Shoes by Dorateymur.