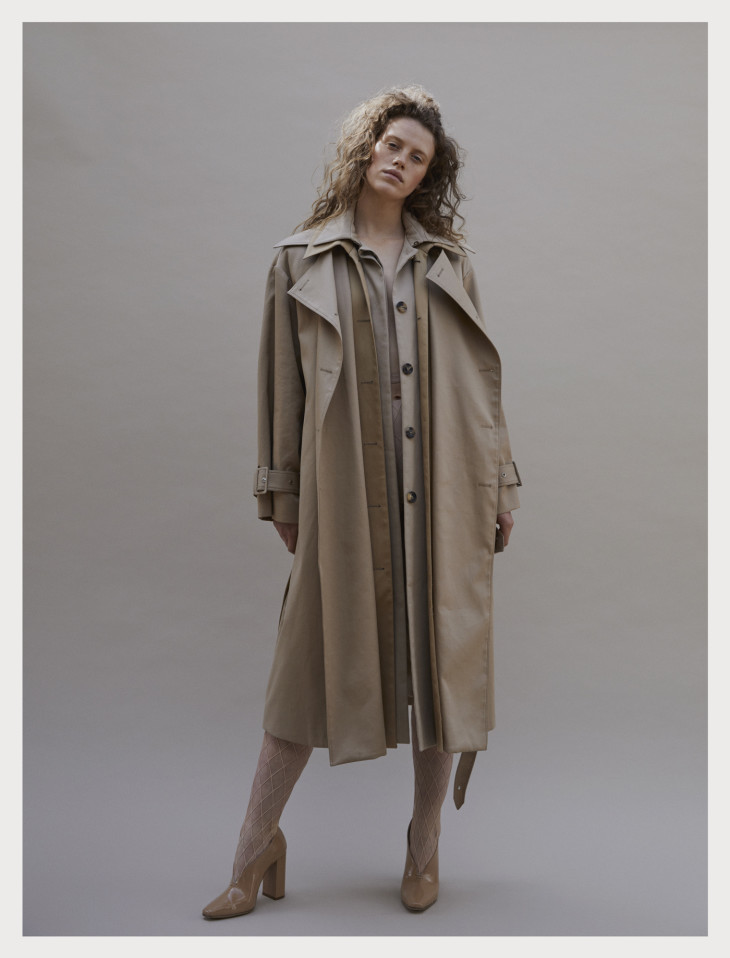 All clothing and gloves throughout by ROKH. Tights by Falke. Shoes by DROMe.

Whether they are members of the X, Y, or Z generation, all teenagers fumble and stumble into adulthood, with hopes of having a better sense of identity and purpose in the end. That period of intense exploration, innocence, and conflict is exactly what the designer Rok Hwang strives to capture at his namesake label, ROKH. “ROKH as a brand is a projection of youth and their struggle,” he explains, “the experiences of young artists, fragility, uncertainty, experimentation, and rawness—it is a nostalgic scent of fragile moments.”

Hwang’s own teenage years living in his family’s caravan in Austin, Texas, provide memories to which he frequently returns emotionally. “Looking back, I always had the most romantic memories of Austin,” he says. “Giant trees and natural spring pools, hanging out with friends, riding a bicycle and jumping into rivers—things you can’t experience living in big cities.”

Austin isn’t exactly synonymous with fashion, as Hwang—who grew up in South Korea and spent his teenage years in the capital of the Lone Star State—readily admits and the city did little to cultivate an interest in design in him. Instead, he was inspired by an article about Central Saint Martins course director Louise Wilson, whose fashion MA program trained the likes of Alexander McQueen and Christopher Kane, among many others. Hwang knew immediately he wanted to experience her view on fashion and design and enrolled in the school. After graduating in 2010, he went on to freelance for Louis Vuitton and Chloé and work as a designer for Phoebe Philo (another one of Wilson’s famed protegées) when she was at Céline. “It was like a dream,” he recalls. “To work next to Phoebe and the most amazing team members was inspiring. Understanding the creative director’s view and working with the greatest talents to build the collection is one of my best memories.” Below left: Tights, stylist’s own. For some designers, it is clear when it’s time to leave the comfort of an established fashion house and set out on one’s own, but for others like Hwang, the decision can seem almost spontaneous. “I guess there was never a perfect time for me to launch my own brand,” he offers. “I think that was the strong reason why I started. It was something I wanted to do at one point so I just started.”

Hwang launched ROKH for Spring 2016 and has been simultaneously building momentum and staying under the radar to carefully establish his perspective and define the ROKH woman ever since. “To understand the brand and to communicate the story of the brand takes time,” he explains. “I want to do everything step by step, correctly, while making timeless and effortless pieces which could be a great investment.”

The urge to slow down is a common sentiment deeply felt in a digital age defined by eyes glued to phones, unlimited access to information at our fingertips, and two-hundred-and-eighty characters served up as breaking news. These external influences have spawned a multi-referential, boundary-crossing generation of fashionistas who Hwang believes are byproducts of our times, but as a designer, he is personally a fan of consistency. “I want to build my own language from my own æsthetic,” he says. “For me, it is important to reference my own vision and my own work. I always find it interesting to go back to my previous collections to build a new story.” Hwang’s clothes look like what a young teenager would wear after rummaging through her chic mother’s closet and reconstructing bits to fit her own tastes: a sleeve removed here and there, a trenchcoat sweeping across the floor like a ball gown, oversized plaid suits and jackets. The palette is generally neutral and earthy, but he pops in strong primary colors every now and then. His clothes strike the perfect balance between fragility and strength, embracing the future while holding onto nostalgia.

With this ability to look both forward and behind, it’s easy to see why he was named a finalist for this year’s LVMH Prize. The accolade is an impressive accomplishment for a designer who launched only two years ago, but Hwang remains humble. “I’m very grateful to be a finalist for the LVMH Prize,” he says. “It is such an amazing opportunity to meet amazing people from the industry and to introduce the collection.”

Currently, Hwang and his team are carefully planning for his first show in the near future. Taking advantage of the multiple platforms offered by the information age, he is also looking to continue building ROKH step-by-step and hopes to incorporate more multimedia elements like images and short films to realize the story of his vision and share it with his customers. “I want to create more of an experience and the feeling of being oneself,” he explains. “This wardrobe is built for a person who can really understand the brand—almost like finding your home.”

For more information, please visit R-O-K-H.com. Take a look at our feature on Doublet, the winner of this year’s LVMH Prize, along with the rest of our portfolio of all nine finalists, including A-Cold-Wall, Botter, Charles Jeffrey Loverboy, Eckhaus Latta, Kwaidan Editions, Ludovic de Saint Sernin, and Matthew Adams Dolan.