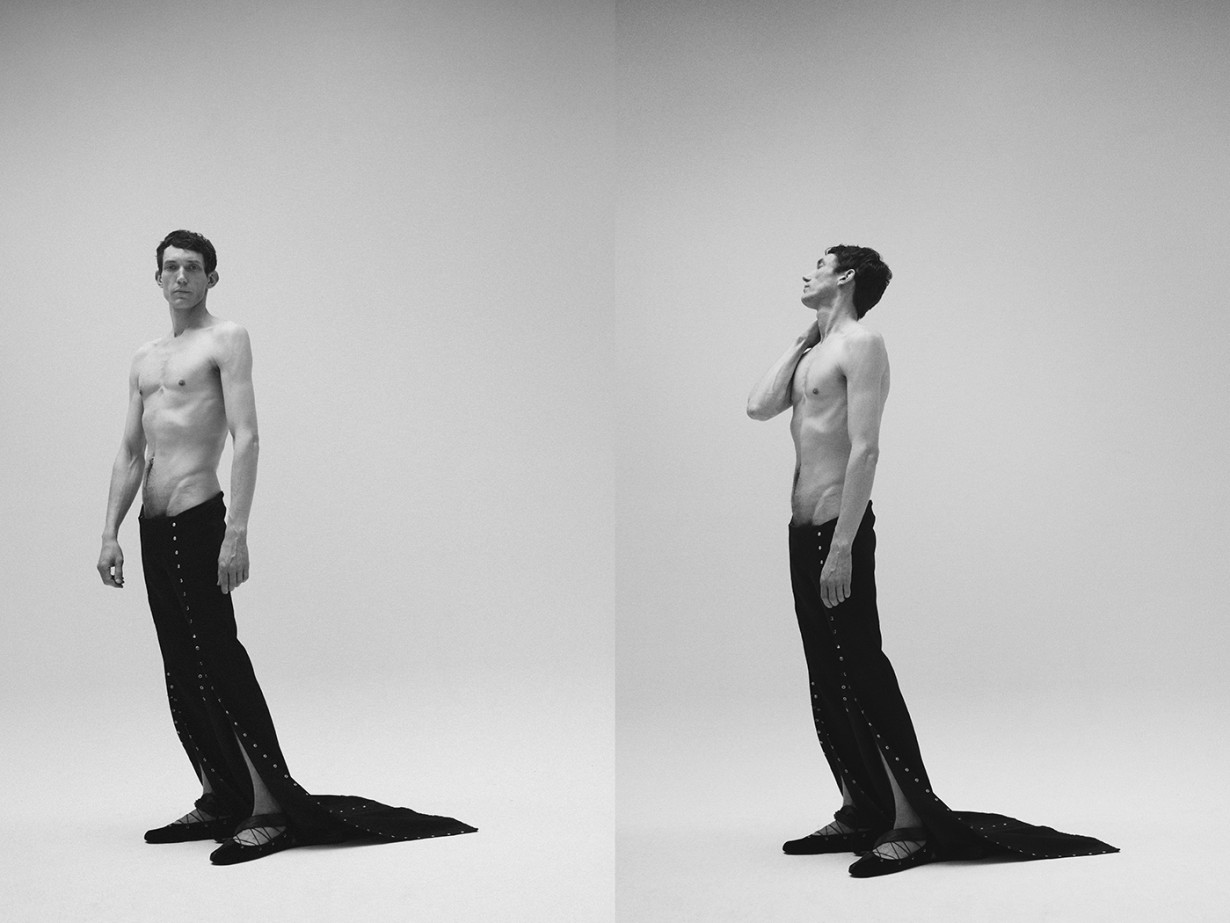 All clothing throughout by Ludovic de Saint Sernin.

When Ludovic de Saint Sernin talks about growing up in Côte d’Ivoire, it sounds like something out of a children’s book, replete with romance and freedom. “It definitely made me a really happy and creative child because I was living next to the beach and I would go there every weekend,” he explains. “There is such amazing nature there, birds, incredible colors, and incredible culture.”

The civil war in 2002 forced de Saint Sernin, along with his French mother and Portuguese diplomat father, to relocate to Paris at the age of eight. Leaving Côte d’Ivoire for France made him very aware of the differences between the two countries, especially when it came to clothing. “When I got to Paris, I realized that because I went to school in Africa, I had a uniform—and then all of a sudden I had to decide what I was going to wear,” he recalls. “I guess I became very aware that Paris is the city for fashion.” With support from his family, he enrolled in fashion school at the ESAA Duperré, graduating in 2013. He went on to work for elite houses like Saint Laurent and Olivier Rousteing’s Balmain, where he was in charge of embellishments and textiles for three years. Even though Rousteing’s world was glamorous and exciting, eventually de Saint Sernin felt he could no longer identify with the brand and decided to strike out on his own. “In your twenties, you discover more about who you are,” he explains, “and for the first time I felt like I wanted to reconcile the fashion I was doing with myself and do something where I was more connected to the garments.”

De Saint Sernin debuted his first collection during men’s Paris Fashion Week in June 2017, inspired by the American photographer Robert Mapplethorpe, whose legacy was immortalized in Patti Smith’s memoir and love letter to Seventies New York, Just Kids. It was a fitting inspiration for someone who has become known for androgyny in both his personal style and his designs, as well as a reflection of his own growth. “It was about my coming-of-age story,” he recalls, “and just embracing the world and owning who you are and being proud of that.”

That first collection was initially conceived as a womenswear collection, but was transformed into a menswear collection and then finally into a gender-bending brand. A lot of words you can describe his designs—androgynous, gender-fluid, unisex, to name a few—but de Saint Sernin, who wears both mens- and womenswear, just wants his clothes to be enjoyed by all. “The collection was always about gender fluidity and owning that you’re happy to wear whatever you feel comfortable with,” he explains, “without looking too much into whether it’s menswear or womenswear.” In that initial collection, there were intricately conceived pieces not entirely suited for everyday wear (a knit jockstrap, for example), but there were also designs that could comfortably cross gender lines, like his flowing and flared trousers with daring center splits, sleek white apron-like tops, and coats made with materials like leather and satin. His second collection, inspired by Salvador Dalí’s Surrealism, showed a similar fluidity, but now constructed in dreamily skewed proportions clearly influenced by The Persistence of Memory. A number of commentators have called the designer subversive, but de Saint Sernin doesn’t quite see the label as an apt description. “I guess that it’s subversive in the sense that some of it is quite sexual and that there is a lot of sexuality in the clothes that I make,” he concedes, “but it’s always done, I think, very elegantly and I also never push it in someone’s face. But I know that my mom will be watching what I do, so I also don’t want to shock her.”

Less than a year after his début, de Saint Sernin was named a finalist for this year’s prestigious LVHM Prize. It’s the kind of ascent that every aspiring designer hopes for at the start of his career, and no one was more shocked than de Saint Sernin himself. “When I started the process of doing the LVHM Prize, I didn’t even know if I could already apply because I’m so new,” he says. “There’s so many good designers that were selected, so I was like, I’m just a little baby, I don’t think I’m there yet.”

Now, de Saint Sernin is planning to move to a new studio to accommodate his growing team, pursue exciting collaborations with brands and celebrities (he dreams of dressing Timothée Chalamet), and formally launch a womenswear collection. The LVMH Prize money would certainly help push his brand forward, but de Saint Sernin is humbled even to be considered. “When I did my last show in June, it hadn’t even been a year,” he says. “I never thought I would be here, but I’m really grateful and excited for whatever the outcome will be.”