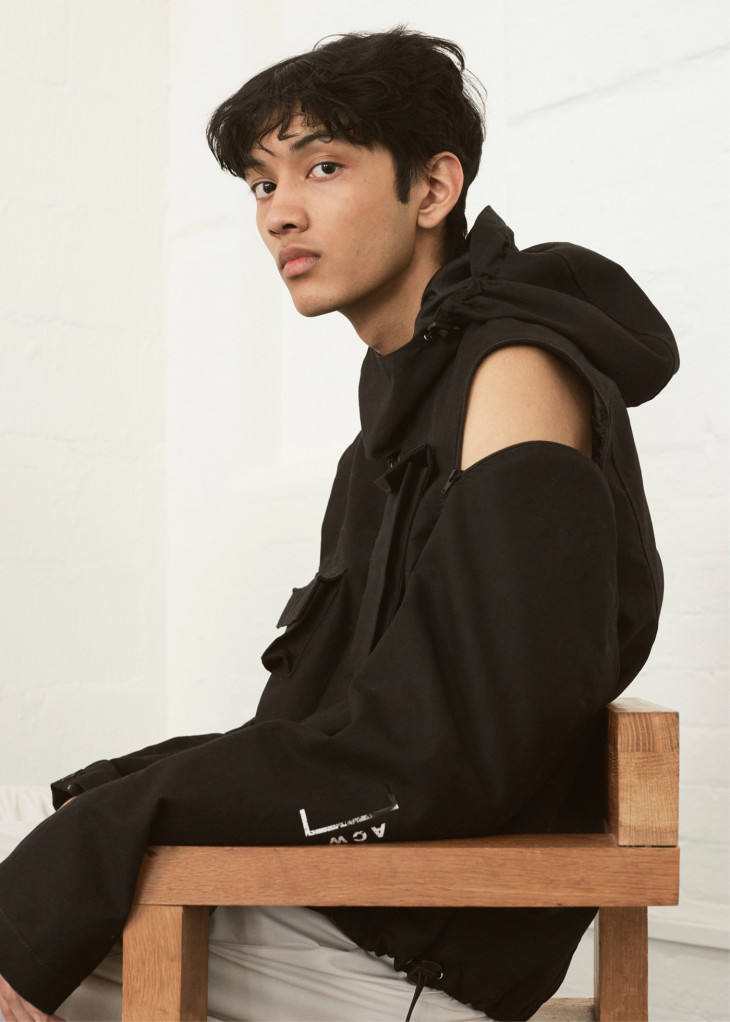 All clothing and accessories throughout by A-Cold-Wall.

Samuel Ross is a multidisciplinary man. His menswear label A-Cold-Wall has just been nominated for this year’s LVMH Prize; he recently launched womenswear and a sister brand POLYTHENE OPTICS*, as well as collaborations with the likes of Nike and Oakley; his homewares line is in its second season; and, at twenty-six years of age, he just had his first child. Even now, over the phone from Los Angeles—where he is curating an exhibition at the multifaceted boutique H.Lorenzo—he’s just finished a morning run. Those who abhor the Insta-born term ‘#goals’ would have to make an exception for Ross, who most definitely defines it.

“I regiment my time down to a T now,” the designer says. “Although my team has grown to sixteen people, I still have to be there for every single important shoot, every meeting, and every call.” He can’t see it being any other way, but winning the LVMH Prize could certainly allow him to delegate just a bit more, “so that I can focus on the overall vision and execution,” he explains.

Ross claims to have learned his impressive organizational skills from none other than Virgil Abloh and Kanye West, the former of whom he served as an assistant for several years. “What I took away from working with them was their diligence,” Ross explains, “that pace, that constant sprint on the treadmill.” As the newly-appointed artistic director of Louis Vuitton menswear and the founder of Off-White, Abloh’s is a big name to drop these days, but Ross knows more about his story than most. “I remember when it was just him, me, and one another assistant fumbling around in the showroom,” he recalls. The two got in touch over social media and worked together until Ross launched ACW in 2015, and they still chat at least twice a week. “Virgil is an amazing mentor and friend,” says Ross. “His appointment at LVMH is just phenomenal. In such a short amount of time, he has completely changed the face of the industry.” Abloh may have changed the face of the fashion industry, but it is his position as a black man in luxury fashion that has changed history—something Ross is well on his way to doing in his native Britain. But gaining huge influence in an industry stacked against people of color isn’t the only thing the designers share. Commercial success is another factor. Ross’s three-year-old brand now turns over six figures annually, which is incredibly rare, especially in London. “It is interesting,” muses Ross. “The London scene is good for high fashion and more esoteric ideas but maybe not so much for brands generating a substantial amount of cash.” What’s his secret? Ross was hustling from the very beginning: “To be honest, from day one I have cared about money as much as I care about design.” But don’t mistake his practicalities for a lack of imagination—he’s got the balance spot on. “Without commercial viability, there is no crazy art project. One fuels the other.”

Ross puts his business skills down to the fact that he was a product and graphic designer before embarking on fashion. “There is this different take on the way that I look at garments to, say, someone that studied through classic art schools,” he explains. “I was taught to approach design with an awareness of commercial viability and a focus on meeting the consumer’s brief. It sounds harsh but it is a reality. Rapport with consumers can really move and set the tide of your brand.”

There’s no doubt that Ross has rapport. His addictive clothing is fast becoming a pillar of London’s streetwear landscape. He’s not a huge fan of the term ‘streetwear’ though, explaining that what he designs is a little more conceptual than what usually falls under that description. Still, when ACW sprang onto the scene with its graphic prints, industrial taping, and nonchalant hoodies, those who were already into the likes of Off-White, Cottweiler, and Nasir Mazhar found something else to become obsessed with. Ross’s Fall 2018 collection blurs the boundaries between function and æsthetics with its exploration of tension and compression. Simple pieces are cinched, paneled with PVC, or punctuated with utilitarian fastenings, poppers, and combat-style pockets to become something entirely different. But beyond these bells and whistles are the boxy cuts of classic but directional wool coats, distressed mock-neck knits, and asymmetric silhouettes that are complemented so well by the clever styling. What’s most exciting about this collection—and where Ross’s product background really comes into play—is that all of the graphics and embellishments are interchangeable and removable. The designer’s personal taste has evolved, but he is far too savvy to erase this signature completely; doing so would be to deny part of his brand’s DNA, one so adored by his faithful customers.

Ross’s own DNA is integral too, his roots woven into every thread of clothing, his history entrenched in every aspect of his brand. A modest upbringing in a poor area of Northampton is what spurred his unconventional pathway into fashion. He found a way around his family’s lack of funds when it came to clothes, whether that was sifting through TK Maxx to find “anything with a Nike tick on it” or creating counterfeit sportswear and selling it. Foretelling, no? Even at fifteen, Ross was working hard to get what he wanted—however big or small it may have seemed at the time.

Perhaps that’s why he’s better placed to represent the rawness of working-class life than most. The sense of ‘wokeness’ that has swept the industry can feel a little false, like a trend at times, and the focus on diversity can sometimes seem like a disingenuous marketing ploy, but with Ross it is genuine. To convey that connection, he takes a three-hundred-and-sixty-degree approach to his branding: designing his own sets for shows, controlling the atmosphere through temperature drops, and even casting models himself. “My whole thing is making sure there is a representation of the multiculturalism of London and inner cities,” he explains. “It wouldn’t make sense for me to talk about these people for my collections otherwise. This is not some kind of fetish conversation. It’s not flavor of the month. This is real.”