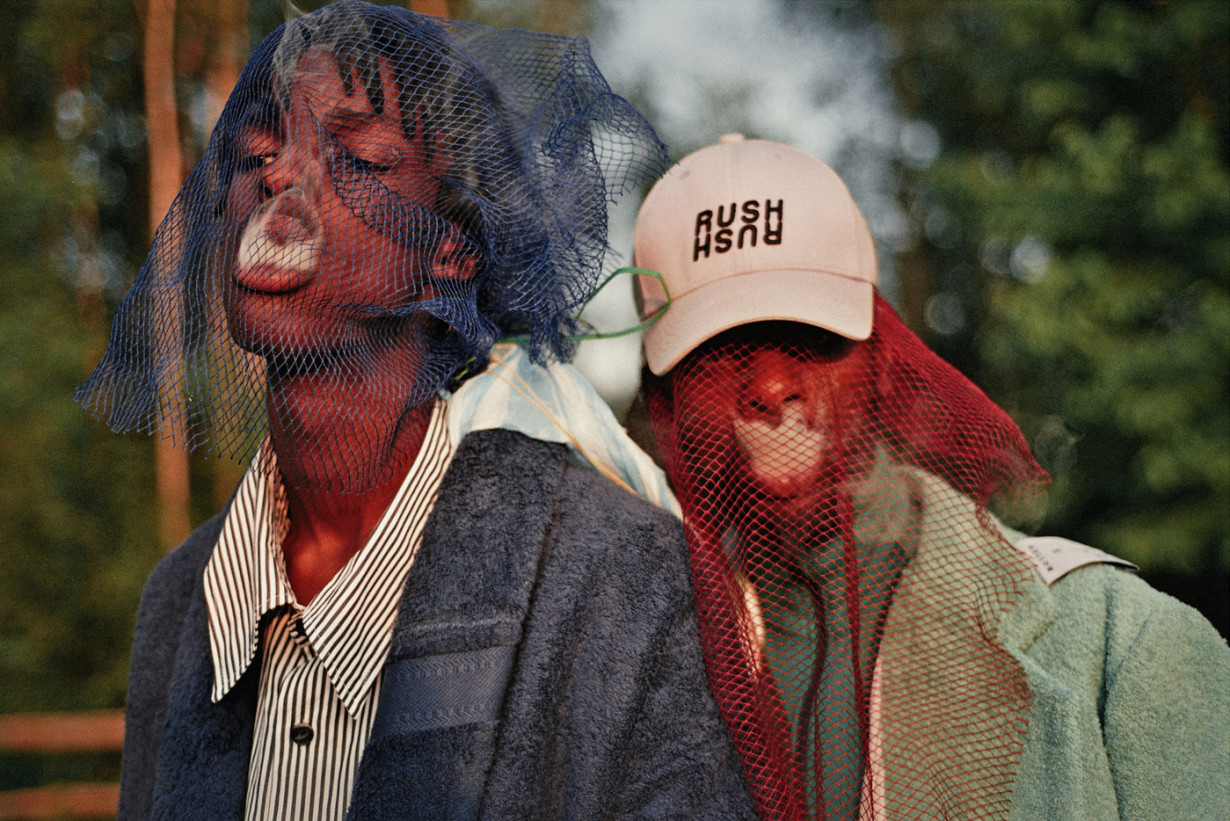 All clothing and accessories throughout by Botter.

Twelve years ago, Lisi Herrebrugh met Rushemy Botter, who lived in a small Dutch village five minutes away from hers. Three years later, they started dating. And four years after that, Herrebrugh and Botter merged forces to begin to create daring, story-driven, socially conscious collections under the eponymous label Botter.

With just a handful of collections under their belt, the brand’s risk-taking ventures are already paying off. Naomi Campbell, Mel Ottenberg, Bella Hadid, Young Thug, and even Anna Wintour herself can be counted among the label’s growing list of fans and supporters. Just last month, the pair picked up the top award at the Hyères International Festival of Fashion and Photography. But perhaps Botter’s most pivotal support will come this June, with the announcement of the winner of this year’s LVMH Prize. “It’s so weird because you look up to these older, more established guys and here they are really supporting your work,” says Botter, shaking his head and smiling in disbelief and delight.

“But you also work 24/7 in a kind of bubble,” Herrebrugh counters, anchoring her partner. “It’s a bit hard at the moment.”

It’s true, getting the two of them together can be challenging as they zip from one appointment to the next, oftentimes between Amsterdam and Antwerp, where the brand is now based. But the duo pushes forward, balancing each other out along the way.

They began when Herrebrugh, who graduated cum laude from the Amsterdam Fashion Institute, joined Botter in Belgium, where he attended the Royal Academy of Fine Arts—the Antwerp school that needs little introduction for fashion avant-gardists. There, Botter honed his conceptual skills under the mentorship of the idiosyncratic designer Walter Van Beirendonck. While Botter never fails to acknowledge the influence of his mentor’s critical eye, he is quick to give his partner as much of the credit for the label’s success. “She’s the real power woman,” he says, situated just an inch behind her. “When I look at her as she talks to our interns, I see her grow. So maybe that means I’m also a power man?” They laugh—his a big, broad grin and hers an understated smile. This very 2018, biracial, multilingual, role-redefining power coupling is something they had never considered before, but it’s obvious there’s an equilibrium here that’s been years in the making.

“We had the same process and same æsthetic, and we’re really honest so there’s great respect—but of course, there are arguments,” says Herrebrugh, ever the realist.

“We just complement each other,” Botter agrees. He proceeds to pull out his notebook from the behind, thick and barely holding onto the attached clippings and cutouts. Herrebrugh offers hers next, a slim and neat booklet with nary a dog ear. These are never out of reach.

“He does the sketching,” Herrebrugh says.

“Yeah I am,” she says as she looks back and nudges him.

As they flip through their notebooks, Botter now reaching over out of excitement, the two of them explain that the best part about working together is timing: There are no set working hours. Which is not to say they work all the time (“It’s not like New York or Paris!” Botter jokes), but having the same goals—and realizing what it takes to meet those goals—also helps.

Take the vision behind the Fish or Fight collection for Spring 2018, a dedication to the couple’s very present Caribbean roots. Botter, whose family hails from the Dutch island of Curaçao, and Herrebrugh, whose mother is Dominican, both speak their family’s languages and visit their respective countries often. They think of clothes as a kind of expressive armor against heteronormative, Europeanized ideas of dress, noting how Caribbean immigrants tend to exuberantly clash with color, overdressing in what we might call Sunday’s best. The way Botter sees it, resisting the Northern European æsthetic of minimalism is an assertion of pride and individuality and the result is an elegant melange of power silhouettes and street style tropes that glows with the added heft of multiculturalism. In other words, Botter is the avant-garde answer to a heritage brand. One gets the sense that in Botter’s designs, Caribbean culture is pared down to its elements and then magnified to excess. For example, jackets and hats are layered—sometimes several times—as a nod to a possible solution for when you just can’t decide which one is going to make the biggest statement. The Spring 2018 show in Amsterdam was, to everyone’s surprise, also accompanied by a spread of traditional Caribbean food that Botter had cooked up with friends.

Most audacious of all is the collection’s confident use of fluorescent fishnet, Shell Oil logos labeled ‘hell,’ plastic bags, and giant inflatable pool toys as headwear. Anyone who’s been to the Caribbean knows the warm, sapphire waters there are disrupted by litter and pollution and, admittedly, the fashion industry is one of the worst culprits around the globe. But the designers’ environmental concerns go beyond wild accessories: They work with local artisans, use recycled materials, and cut fabrics efficiently enough to eliminate waste. Herrebrugh and Botter also hope to one day bring their fashion world to its original source of inspiration by organizing a show in the Dominican Republic.

Having only been in the public eye for a year, Botter is already a name to remember thanks to ambitions and ideas like these. Botter with his blue-sky thinking and Herrebrugh with her managerial prowess combine to embody the kind of design philosophy that proves Antwerp is still thriving and fostering great work—and also great partnerships.